What did you do to your car today?

OLE PONY said:
I stood in the garage and stared at my 73 Vert for a while!
Click to expand...

I do that a lot too. Well, stare at my 73 convertible. I've never been in your garage.

I have been about 4 years into what otherwise would of been a parted out '73 vert. I bought this poor stang sight unseen Ebay auction, priced down as it was obvious it had problems, clearly different owners, wrecks, prior "lip stick", ie, top and interior done years ago, mechanically shot, nothing working right, oddly except the 351c -which ran like new for some strange reason given the condition of the car. I paid too much to get it traylored to Arkansas. For 2 years I had the interior pulled, the filthiest car I had ever seen inside and out, struggled to fix many wrong headed work done from prior owner, only able to work late hours after coming in from work. Doors were from another car, but fit reasonably well, much screwed up vacuum, wiring, I had to wire the door speakers for the original radio which was still there (AM/FM 8 track tape). On a budget, it looked pretty hopeless, but began to come together over time. I had a good mechanic friend that stepped in on things I could not get to or do, ie trani rebuild, suspension/brakes, front end, safety issues. Finally, the stang was ready for a paint body job. So many panels, quarter panels, all of the trunk, rear end had been in so many prior body shops (prior body stuff done well though, but nothing seemed original!), so on a budget paint job, not the most expensive or cheap, I had all dents out, not much rust, but what was there removed, stayed on budget, trading for some services, etc. It came together far better than anyone (especially my very patient wife) could believe. I wanted a daily driver, and it exceeded my expectation. Not show car re-done, but good enough for me. So, what was left, why I am writing this.
The sound out of the original radio/8 track was poor, scratchy and could not pull in any decent FM. I ran across on the Internet "Restoration Radio", they claimed they could take any original radio, make it sound new with bluetooth, powerful, and it would retain its original appearance. I thought, why not? It was very expensive for me, $300 down with the radio sent in to them, and about $400 when done. But sound is important to me. I had only placed "walmart car speakers in the doors", and as I recall, nothing expensive, I did not look forward to pulling them if they did not hold up. It took them about 6 months, i had my doubts, but they were always responsive, always answered my calls for updates, emails, etc. it just seemed they were a small family shop, supply chain issues, then one day they called to confirm everything I wanted, explained everything to expect, and it was shipped to me, I just recently installed it connecting only to my front door speakers. I have to say, the sound is ASTOUNDING! A small mic was included that I ran from the right front dash under the lip hat works to take or make phone calls, it pulls in every FM station, the 8 track is like new ( I love my old 8 track tapes), I hate to say it, but it was worth breaking my budget! The Restoration radio people were refreshingly different, they wanted it RIGHT, every detail, several phone calls from them prior to shipping. I was impressed. So what did I do today, I took a drive, and listened to AC/DC with the top down, I felt 50 years younger.

droptop73 said:
I threw a wheel on front last night to have a look see. There's a bunch of clearance. I'm pretty happy with the look so far. I'm gonna need longer brake hoses though.
Click to expand...

Where did you get those wheels, their fabulous!

Thanks man, I wanted something a little bit different. I found them at Late Model Restorations. They are a reproduction of the SVT 10th anniversary wheel. For a time they offered them in an 18x9 and 18x10.

Decided to change the fixed radio antenna to a retractable. I don't use the radio that much but the fixed antenna section is a problem when fitting a good car cover. Didn't really want to cut a hole in it. I purchased a cheap retractable antenna ( $12AUD) and modified the mount to fit the original rectangular hole and chrome cover.
First I cut out a 6mm thick piece of perspex, shaped and drilled to suit the chrome cover and the new antenna shaft. This needs to act as an insulator for the new unit. The center hole needs to be drilled at the correct angles in 2 directions to sit straight on the mudguard. Radio reception just as good. 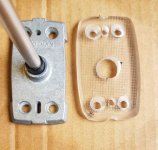 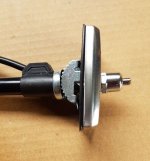 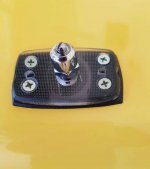 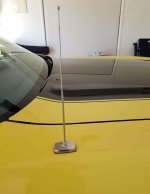 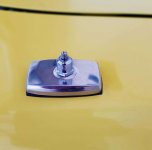 Today I searched for more parts and made plans for getting the Stang back on the road. One of my least favorite things is the rig job I had to do to make the power steering pump work on my 351w coming from my 302w engine way back when I did the swap. It does work, but I recently saw a video where a guy swapped in a Volvo electric power steering pump into his corolla and I wondered if I could do that on the Stang. That would eliminate an engine belt and save some weight. I found an example of the retrofit in another forum. https://www.corral.net/threads/volvo-electric-power-steering-conversion-full-write-up.2499503/

I also found more information on electric pump operation specifically how to control power to them. http://www.super7thheaven.co.uk/corsa-c-electric-power-steering-epas/
Last edited: Apr 1, 2022

Aus73Mach1 said:
Decided to change the fixed radio antenna to a retractable. I don't use the radio that much but the fixed antenna section is a problem when fitting a good car cover. Didn't really want to cut a hole in it. I purchased a cheap retractable antenna ( $12AUD) and modified the mount to fit the original rectangular hole and chrome cover.
First I cut out a 6mm thick piece of perspex, shaped and drilled to suit the chrome cover and the new antenna shaft. This needs to act as an insulator for the new unit. The center hole needs to be drilled at the correct angles in 2 directions to sit straight on the mudguard. Radio reception just as good.

Just to clarfy the need for the insulator. 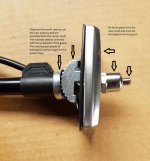 I didn't do anything to the brake upgrade... the weather in Michigan sucks.

Aus73Mach1 said:
Just to clarfy the need for the insulator.

This is a great idea and solid execution!

I did push the Mach outside to get to some parts stored behind it. Had to dig out a power window motor, as the driver's door in the Squire decided to crap out in the full down position. The wife and I took it out for the first time this season. Went to breakfast, then to a photoshoot at work featuring employee cars. The group photo will be used in the flyer for our car show in August. This one is mine, the photographer was on our man lift about 25ft up. 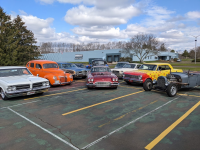 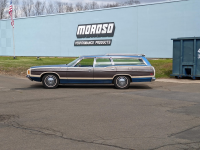 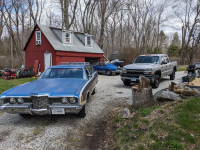 It hit 60 here today in SE WI so I pulled the clock out to send to RM, put the top down and boot on and went across town to top her off with premium and calculated my smiles per gallon at 8.25, blew past a '70 2dr Impala on a Sunday drive, then parked it front first downhill in my driveway to ensure my rear main seal wasn't leaking, and then pulled into the street turned the wheel 3.5 to the left, dropped to 1st, and spun it around 180 with a crack of the throttle and eased her into bed. Fun day!

Working on changing my third member from a 3.25 open to a 3.50 Trac-Loc. Removed the original 3rd member yesterday to find a bunch of things that put me behind. First thing I found was that Quick Performance send me the 3rd member with the incorrect yoke. Second thing was that one of my axle bearings is shot, so I need to take the axles to someone who can change the bearings. 3rd thing to happen yesterday is that I screwed up my back, so now I am in a hell of a lot of pain. Even with all the back pain I was adamant that I was going to get that 3rd member in the car today, so I first had to pull both yokes, one from my old 3rd member and one from my new one, which I did. I also ended up pulling the pinion snubber and bracket from the old third member. I got the old yoke and pinion snubber bracket wire wheeled, the cleaned them with brake cleaner, and finally with grease and wax remover and gave them both a coat of primer. After that my back was killing me, I could hardly stand up or move, so I had to call it a day :-(

Pulled fuel pressure gauge from carb feed line, only took me 9 months after engine install to figure out system is working as it should.

Blayne9067 said:
Pulled fuel pressure gauge from carb feed line, only took me 9 months after engine install to figure out system is working as it should.
Click to expand...

Did a refresh on the three carbs a week ago. Needles/seats, bowl gaskets, accelerator pump and power valve. Fired it up and drove it around a bit these past couple of days. Set the fuel bowl levels today and once the old gas is burned off I will reset the idle screws/speed. The old girl has been mostly sitting for the last two years. I went to do one of the monthly startup ups about 6 months ago and it was leaking from the accel pump onto the manifold and would not start. I am happy to be driving it again.

Removed old taillight panel and mocked up the new one. Still quite a bit of metal to replace.

Pushed it back a bit in the garage, changed the oil and filter. Fired it up, drove it back in again. Still waiting for a few more heavy rain falls to rid the roads of salt then warmer days so I can get friggin driving again!!
Last edited: Apr 16, 2022

Done a lot of work these past few weeks. Trying to have it ready next week for race season. I need to complete the installation of the new spindles and complete readying the engine to start after the cylinder head work. A lot of details left but I am targeting this weekend to roll around the neighborhood!