What did you do today instead of working on your Mustang?

So instead of working on the Mustang I decided to work on my daily driver project instead.  Master cylinder was leaking on the diesel 83' GMC 4x4.  In the process of replacing the master cylinder I broke a mounting ear off the hydroboost.  One mystery remanufactured hydroboost later it is all back together and working.

Since the last time I worked on the Mustang (Dec 26th) I tweaked my back (L4 nerve pinch), I've pretty much been sittin' on me arse making sure I don't breathe or bend wrong to anger the lower back gods.  It's gotten better, I can actually walk without the cane I swiped from my wife, and I'm at the level 'moderate discomfort' as opposed to actual pain.  Still gotta be careful bending and twisting, though.

Aside from that, I gave Eddie a buzz today.  He's gotten fuzzy beyond belief, so I whipped out the clippers and gave him a buzz (used the #7 blade on him).  Tossed him up on the kitchen table and went for it - only took about 80 minutes this time, unlike the standard 2-3 hours (because he wants nothing to do with it and fidgets constantly), but my wife helped rotate him around and keep him still when I worked the complicated places.

He looks like he lost about 10 lbs... I wish I could look like I lost about one-fifth of my body weight just by getting a hair cut.  rofl

Is Eddie your pet sheep? A dog? Your son?

Worked on someone else's mustang!

The Mustang is at mom's house so I don't get to work on it. But I did get to take the Jeep out wheeling today. The weather was awesome.

Sorry - Eddie's my dog.  He's a 45 lb Cocker Spaniel we rescued from the local pound about 4 years ago.  I didn't get an 'after' picture, but here's one that shows how fuzzy he was before. 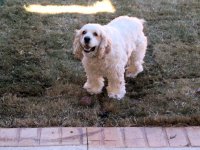 And here's one to explain that "45lb Cocker Spaniel doesn't mean he's fat."  He's just a big dog - probably has some Clumber Spaniel mixed in as well.  That's 4 feet of decking around the pool, for reference. 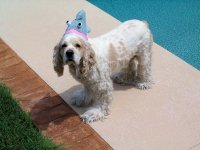 He doesn't look too happy with that hat...

She thinks it's fun to put some kind of costume or 'accessory' on him now and then.  This was during "Shark Week 2014" (yes, the Discovery Channel thing).  We'd just opened the pool and she thought it would be funny.  He really doesn't care, but I'm with you - that's not his happiest face.

Today involved finishing up another project totally unrelated to the Mustang, but at least it is one less in the queue. Then I enter the work week so I can pay to play...

Took the wife to the Home and Garden Show so she can come up with new ideas for me to build.

Tearing up the linoleum in the bathroom so we can put down slate.

Fixed my Mom's car.  Last Tuesday (Valentine's Day) she ran over something and messed up something up front, so something was causing the car to not go forward or backward.  Had it towed to her place and parked it.  It's a '97 T-Bird LX.

So Thursday night, I was talking about just buying her a newer used car (she's on a fixed income, and seems happy just barely scraping by - for some reason... whatever).  Anyway, my wife was commenting on how messed up it would be if I found Mom a nicer car than hers (in all fairness, my wife's '01 Grand Prix GT is an awesome car, not a scratch on it, and only has 72K miles - it's a REALLY nice car... and not worth more than $2800 because of the age - no way could I find a nicer affordable used car for my Mom).  I suggested we just buy her [my wife] a new car and give Mom the Grand Prix.  She said it's an idea, and to figure out what's wrong with Mom's car over the weekend before we make any decisions.  Sounds like a plan.

I get home from work on Friday and she's car shopping with eyes on a silver 2013 Camaro about 90-miles away in Abilene.  Uh-huh... now the tune is, "you know, you've been limping that old beater of hers along for years now and it's not going to get any better..."  Yeah... I think I can see where this is going.  OK - you know, she hasn't been excited about a car, like... ever, so I'm on-board.  I called the stealership in Abilene and they'd already sold it.  (Well - take down the freaken ad already!)  OK - so, I break the news to her, and we both got online and started looking.  Nothing along those lines within 500 miles... but I found a gorgeous 2014 in deep cherry pearl red up in Dallas, which was everything she wanted and she fell in love with... even with costing more money than she initially wanted to spend.  So, I call them and they'll hang onto it until Monday - I told him we needed to find a local car to test drive since she's not comfortable driving unfamiliar cars and I'd call them back.  Jumped online and found a good candidate to test drive at a local lot.  So, we beat feet over there and test drove it - she loved it, is comfy, happy, and the car we drove even had everything she wanted... except for the color.  Then, instead of thanking the salesman for the test drive, we went inside and started talking.  Whoa - slow down.  It was more expensive than the one in Dallas, the wrong color, and probably not quite as nice, but something clicked and she decided that's the one she wanted.  OK... well, it's a LOT more than the one in Dallas... because... well... it's a 2015.  Well crap - there's the difference - if we'd been interested in this car for more than just a test drive, then I would've noticed that.  But OK, let's buy a car.  So we did.  She wound up with a 2015 Camaro 1LT, loaded with everything (and more) that she wanted (including a sunroof!) and she loves it.  We thought we got a good deal - but they sweetened the pot with $500 off the sticker (which was still fair), lifetime oil changes &amp; state inspections, and offered to tint the windows - all because she played it cool and mentioned that she didn't actually "need" the car (pretty clever - I suck and making car deals).  She did pretty good, I think. 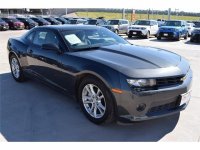 And I didn't have to lift a finger on that old T-Bird. :whistling:   rofl

Welll, I went to my place of work...as to whether I worked or not...

Welll, I went to my place of work...as to whether I worked or not...
Click to expand...

Worked on my winter daily driver (82' GMC pickup on one ton axles).

It ate the nozzle on one of the cheap Delphi injectors I put in it a couple years ago (the injector on the right is toast).  Now it is back to running as well as a 6.5L diesel can.

S
What order did you do your restore