will e said:
"There is no replacement for displacement".

FastE said:
By the way Gearge is on facebook also.He is always open to questions and helping others. He does not beleive in strocked Clevelands though.He likes them the way they were designed.
Click to expand...

Please show me where anyone said NASCAR was the reason for the design???  You are like the internet distorted. Yes the first 302 Boss was for trans AM. A former member here not passed was the leader of that engine. TA racing was a drop in the bucket for Ford. There was way more in NASCAR. I worked in a NASCAR shop and I would never race in their ranks due to the corruption that I saw first hand. The Cleveland engine was simply the next step in engine design not driven by any racing efforts. Racing lost money for Ford dependable engines on the street made them money.

Awesome information. I have 351 Cleveland, 2V on my 73 Mustang. I wonder how the 2Vs compare to the 4V and any other cool tid bits about it.

Hey I'm also from western NC, Wilkes County. The reference to being designed for Nascar was in one of the articles above. My dad was one of the founding fathers for Nascar. He stayed in it up till the mid 60s, if you were around in that era you might know him. He owned the track in Asheville &amp; several others. I can personally attest to the fact that Nascar was started by a bunch of rum runners. I'm currently looking for a 71-73 fastback straight gear car. A 3 speed manual is fine because I intend to convert it too a 5 speed anyway.

Win on Sunday, sell on Monday.

Trans - Am was a big deal up north, the entire Boss 302, Z-28s, Trans- Am Fire bird, TA Challenger &amp; it's Cuda equivalent were developed for it. Oh forgot AMX Javelin too.

Halo homuglatuon cars like a Boss 302 are important. Guy goes into a Ford dealer wanting a orange Boss, his wife talks him into buying the baby  blue 6 cyl notch back that's on sale for about 1/2 the price. Happened all the time.

Ford lost $$ on every 427 engine &amp; car it ever made, BUT how many 390 Galaxies did they sell because of those loss leaders? Looks the same, smells the same, waay cheaper. Most new car buyers are tighter than a bulls a$$ in fly season.

So I guess your dad owned the New Asheville Speedway?? I worked for Roger Ingram, Jack Ingram drove Chevy and his brother Tom drove Ford. Larry Ingram was great at porting heads. Roger was like the innovator of the Ingram's. He was always trying to find a new way to cheat and not get caught, lol.

All the idiots in Asheville got the track shut down I use to love to sit high up in turn 4. A lot of pretty good drivers got their start at the NAS. Now all they do is run on foot on the track or maybe ride a bike.

I have been putting off getting over to visit with Ben Barnes I want to build a track days car myself. Ben use to kart race when me and my son did. He is about the only engine builder left that will help out the little guy any. That was what Roger did a lot of. We use to build engines for Cecil Gordon and he ran nearly ever race in NASCAR and cut pulp wood to make a living. I know the Ford dealer in Hendersonville, Garrett at the time use to hold invoices until he could pay. As far as loosing money on the 427, I think they did not loose on the normal 427 it was the Tunnel ports and SOHC that lost money after NASCAR outlawed them.

On a car there was a 72 fastback, blue in color for sale last fall but with the virus I have not seen them at local shows. It was a pretty solid car but was not a Mach 1 which is not a big thing.
I am over in Hendersonville, NC. Are you going to build a car like Joey Logano? 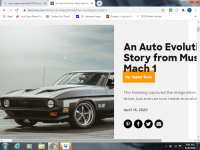 The track my dad owned was asphalt &amp; was wherever they raced in the late 50s- early 60s. I know it had a baseball diamond in the infield &amp; got shut down by the govt. He owned several other tracks, in fact I think he may have owned the track the first NASCAR race was run on. It was near Durham in the V where I-40 &amp; I-85 split &amp; was a horse track to begin with. They had some races earlier at Daytona but they weren't on a track, just racing up &amp; down the beach mostly. My Dad was pretty close with Banjo Matthews, Fireball Roberts &amp; Junior Johnson. I don't know Joey Logona. I just want a pretty nice fastback with a stick 351. My favorite would be a 72 R code medium yellow gold. I know you like convertibles. There is about the nicest 73 convertible I've ever seen on ebay right now. Q code 4 speed with about ever available option on it.

My Dad was Dobe Powell, in case you knew him.
You must log in or register to reply here.