Do they or you have the Marti report ? Good place to start your research to see how the car was built and what has been changed.

Do they or you have the Marti report ? Good place to start your research to see how the car was built and what has been changed.
Click to expand...

Sounds like the dealer is treating you right. Lots of shady places that like to make a quick buck off classics, hence the multitude of concern.
Click to expand...

I understand and do appreciate the input
Click to expand...

He has the original owners contact info who I will be able to contact once the deal is completed. He already has a fair bit of info from them.

Thanks to all for your input and advice;

I have been filled in on the history of this car. The family that bought it for their daughter for a well off family. While their daughter was away they had taken it out to be refreshed and had the idea of changing it to a 351. This is why the engine brace is there as well the undercarriage frame bracing was done. From what I understand Dad wanted to hot rod the car to which his daughter rejected this idea. I am told the original motor was rebuilt and returned back to the car. I am trying to confirm what was done. There has been a pre-oiling system added which I am not sure I will leave on. It was during this refresh that the hood and front fenders were changed.

I have confirmed via the door sticker that the car was factory bronze metalic. The seats are original which are being redone due to a split in the drivers seat. They have a new set of ginger seat skins from NPD ready to go on. 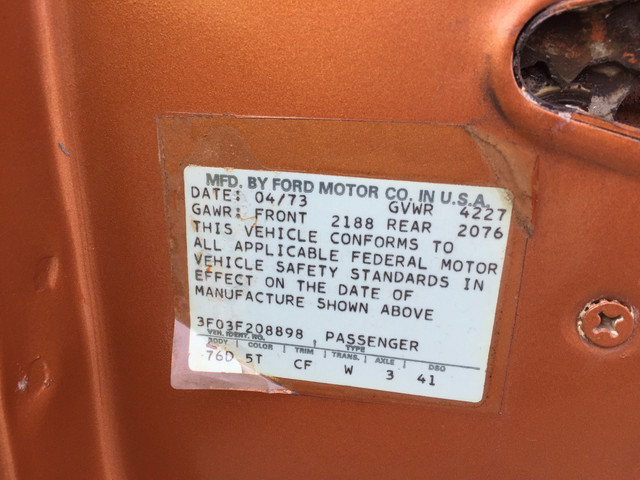 During an under car inspection I noticed some flaking which appeared to be possible rust but couldn’t tell due to aftermarket undercoat. the car was sent out and had the entire undercarriage soda blasted and recoated. No rust was found and cleaned up nice.

I should mention the dealer I am working with also handles our commercial account and wants to make sure the car is as I want.

I am not looking for a correct car but more for a car I like and can drive during weekends to do who knows what....If I had a concours car I wouldn’t want it to leave my garage. That being said I have to commend those who do preserve the history of classic cars .

Currently it is having a few paint touch ups done on the door edges where they have clipped something.

Once the car returns and has the seats done I will return for a follow up inspection. I will keep you posted and until then may have further follow up questions

Thanks again for the input

Cool, seems like you got a really nice car!

I received the Marti report for the 73. Other than the wheels and hood, as well as some of the engine bay changes, it seams to be correct from when it was built.

I am still waiting for the car to come back from touch ups and upholstery to make a final decision. Stay tuned.

If you like the car buy it but with all the work they did it does not add value it takes away.

I do not think I have seen a price mentioned in the thread.

I can tell you that that last year a 1973 convertible that was all original, 351 4-V, 4 speed with NASA hood and black out, side stripes and about every options sold for $30,000 on ebay. The car was perfect and had never been washed was kept in a plastic cell in climate control.

I myself would not pay much for that car with all the incorrect and badly done items.

I see the screw head painted on the end of the door which shows a complete respray. A 33,000 mile car should not have needed anything.

BTW the repo interiors are not like the original and do not look right.

Undercoating is usually applied to hide sins. My original was undercoated by the dealer the day they received it. It was actually on the order that went to Ford. I have the documents to prove that.

Just my opinion everyone has one.

Thanks for everyone’s input. I didnt end up purchasing this car.

Thanks for everyone’s input. I didnt end up purchasing this car.
Click to expand...

Sometimes harder to say no than yes. Do not worry, the right car will come along.