A Galapagos for old cars - or what is left of them.

Just a little different but just as most older cars I saw in Mexico - they have been driven; and then some. Interesting examples - but well used. And some of their mechanics have become quite resourceful. 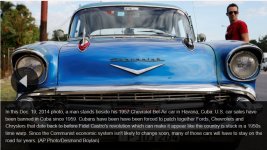 I spent a month in Cuba and went places I was told they had never met an American before, lol. Rode on the last electric train still running there from Hershey, yes the chocolate guy built the town and when revolution hit they sent him home, to Matanza. The cost was 1.5 peso and was afraid the darn thing was going to fall off the tracks, lol. The conductor could speak English and he said we were the first Americans to ride his train in the 15 years he has been the conductor. We took him to eat at the hotel which was his first time out for a dinner and bought him a couple beers. The hotel price was 2.00 CUC or about $2.00 each and his monthly salary was $22.00 so he could never afford anything except home. We got some more beer for the train engineer and his other buddy on the train. People were friendly and most of the old cars have had the gas engines pulled and Korean or Jap diesel engines put in place. They have some really hybrid cars after keeping them running since 1959.

I did find one Cadillac that I think is somewhere around 1906 - 1908. I have some pics and it is R.H. drive with the almost vertical steering. The engine was in the chassis but the remainder of the body was in bins. Most of which was leather back then and long gone. The engine was there and all the wheels and chassis. I will do some research on that one. The only other car of interest was a V-16 Cadillac I think 1930 might have been the only year. They do get cars into and out of Cuba by ferry to Mexico you just have to pay the piper enough to get them in or out.

There has to be several expensive cars still there with all the millionaires that got sent home. Everyone I asked told me that the officials got all of the good cars and they did not know where they were. You could make money taking the 4 door cars nobody wants here and selling them there. They chopped the tops off most of the hardtops to make convertibles out of them, some pretty good and some bad ones.

I did loose weight while there that was good, lol. There grocery had rice, beans, and some canned tomatoes and a little frozen meat. There were soda crackers and some chips but most of us have more in our kitchen than a grocery has there. You have the street markets for meat and veges but not much to pic from. Average job is $22.00 a month with a doctor getting $40.00 / month and the highest paid job is workers in the tobacco fields at $45.00 / month. They consider that the most difficult job so they get the most.

Made it back with four bottles or rum the best I have ever had. I ate Mexican tonight was starving, lol. Makes you appreciate what we do have here.

Now back to working on the garage so I can get to work on the cars.

David, Thanks for sharing. I wondered where the neat cars went too. Has to be some hidden there somewhere.

Really interesting about the forced innovation/hybrids.

Any electric cars? Thanks for sharing

Any electric cars? Thanks for sharing
Click to expand...

I did not see any electric. Since there are not any businesses in Cuba, only government, there are not scrap yards to sell junk to. Junk is all over the ranches because they cannot haul to town and sell to make money. You can haul to town and give to the government so they just sit. The cars are ragged out for sure. Someone is making the windshields for them when you rode it them you could tell they were not original too many bubbles and waves. They take what they have and hammer out new fenders and quarters just to have some kind of transportation. When you can ride the bus for .10 you don't need a car but they use them for Taxi mostly.

Since the people do not travel they only know their little corner of the country so it is difficult to track anything of value down.

They have to be well versed in diesel mechanics for sure.

From the 7173 Wiki Blog: Investment cars

B
Anyone autocross or race their 71-73 in SCCA type events?