How to find the right muffler?

Stanglover said:
So, who's a funny boy Eh!
Click to expand...

tony-muscle said:
My solution was to use the Dynomax STs with exhaust cutouts. This setup gives you the flexibility of running relatively quite with cutouts close but then you can control the "volume" by opening the cutouts as much as you want. Find the version of cutouts where you can control the opening manually rather than either fully opened of fully closed. I am typically cruising with the cutouts closed, but when going to a car show or in the track I open them slightly to get the rumble sound and reduce any performance restriction the mufflers and pipes provide. I don't typically run them fully open because it gets obnoxiously loud but then my EFI struggles in ide due to the location of the O2 sensor near the cutouts.

Edit: to clarify, what I mean with opening/closing the cutout flap "manually" is really via an electric motor, but you can control the motor from inside the car by manually hitting the rocker switch so you control the amount of flap rotation you desire instead of fully open or fully close.
Click to expand...

I dont suppose you have a pic under the car that shows where you put the cut outs? Im planning on making the exhaust myself and right now Im just trying to lay it all out on paper since the engine is out.

This is one before welding it all together but it shows the location right after the header collectors. I since installed "half" turndowns to push the exhaust downwards. 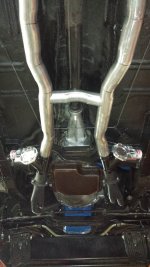 Tnfastbk said:
If you run an X pipe or an H pipe that will also make a difference. When I switched to the X pipe my car got considerably quieter.
Click to expand...

You'll get an awful cackle out the pipes otherwise.

RC92234, what mufflers are on it now (the new ones)? A crossover might be all you need.

Got my system from Don of OMS, did self install so aware of crooked extension.