Top Gear got thrown out of Argentina

Not a fan of Top Gear. They suck as far as I am concerned as far as car shows go but I saw this in the news. 1st link is Jalopnik Story about them getting thrown out and second shows cars they left.

Pull up the link and what do I see but some off road 7173 that they abandoned on the way out before the got lynched. 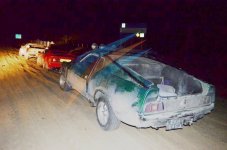 i like top gear, you just need to understand the humor

awe now the new UK season is going to get pushed back into mid 2015 (top gear USA is garbage.)

i hope they air the Argentina trip with the footage they have that would be epic.

Well, there is another country I won't set foot in.

i like top gear, you just need to understand the humor

awe now the new UK season is going to get pushed back into mid 2015 (top gear USA is garbage.)

i hope they air the Argentina trip with the footage they have that would be epic.
Click to expand...

I have no problems enjoying good British humor. Jeremy most often times though is nothing short of an offensive douche most of the time.

that is because he is the perfect lead foot idiot , Adam Ferrara is the same on the usa version.

Clarkson is a master troll as well .

James may attacked him with a machete

i remember way back i got offended with some comments he made about America, but i didn't care hahahaa

I love the British show. The US show is not very good, though.

Is it bad that the first thing I thought of was "this is going to be a great episode!"

it appears from the photos from different articles that a couple of things happened.

First the Porsche clarkson had was reg with plates from 2001 that read "H982 FLK" when they first started filming that plate was on the car.

the car had a previous reg plate as well. so when somebody took notice of the new plate they raised a stink and swapped to the old reg plate for the porsche.

It appeared they filmed enough of the episode that they got to modify the cars.

in the older photos you can see the green sport roof appeared to be a 71 or 72 really hard to tell, but it didn't look like a 73 from the blurry photo i could find, and it was normal looking sportroof. during production hammond had modified the car with more ground clearance, roll bar, roof lights and cage, gutted the trunk and made it into a jungle pickup.

the other cars also had been modified with additional spot lights for night driving, that was shown in the photos of when they abandoned the cars as the riot happened.

oh man they have to show this episode right up to when they had no more footage it will be hilarious.

I go out of my way to watch the show. Whoever put the three of them together is a comedic genius.

here's the car they started with. What a shame.

Creating controversy and hubub makes for self perpetuating marketing energy.

I don't like Top Gear either, tried watching them a few times and always wound up changing channels.

An entertaining and amusing show in many ways, but a bit too Clever, Clever and smart arse me thinks. Have lost interest over the years. The Aussie and American spinoffs are a poor man's copy imo.

As Greg said it is a very clever show. One does need to have a good understanding of global affair and embrace some of the subtle humour not just be into the cars. Oh and as stated controversy breeds interest, we are already talking about it. I will be looking out for it when it does air

Top Gear fans, check this out!

If I were the guy that sold them this Mustang I would be very upset seeing what they did to it. :-/

I assume they never told the seller that their intention was to wreck it; either that or they told him but made him an offer he couldn't refuse. If it had of been my ex-car I would have been sobbing for months....

On a brighter note, look how good the Mustang looks mixing it with a Porsche and a Lotus, it's styling fits right in

It is a shame they took what looks to be a pretty decent Mach 1 and trashed it like they did.

They are surely going to have the same comments they do about every American car they drive: " It's a tank, it handles atrociously and all the plastic bits fall off in your hand."

The one thing I don't like about the show is that they often destroy perfectly good cars that would be worth saving.

An entertaining and amusing show in many ways, but a bit too Clever, Clever and smart arse me thinks.
Click to expand...

Precisely. The more the show has grown, the harder the creative team has struggled for ideas - thus inserting shock value stunts to keep interest, more often ruining a good show than anything else.

Case in point: The VW Scirocco commercial. Very funny, right until the extensive use of gore for very poor humor.

And yet, they want that - because, as stated here before, well-managed controversy is your best PR, and this Argentina stunt can't be any different.

It's probably how they scripted the whole segment, which seems to come out of a Monogram kit box anyway (Skill Level 1):

Creative 1: "Let's have them do (insert silly or offensive thing) while in (select name of country)!"

Creative 2: "That sounds great! Let's have them modify their cars for another (insert silly challenge)."

Creative 1: "That's good - everybody likes the challenge segments. But how can we make this one different and stand out?"

Creative 2: "We can have explosions, because explosions make everything better!"

Creative 1: "We've done that already. Let's have everyone shoot each other and kill Jeremy. If the teens and tweens who watch Freddy Wong's channel on YouTube think it's funny when someone gets blown to bits, it'll work for us."

Marketing assistant 1: "Not good enough. We've already pissed off the older people who think it's disgusting. They don't complain as much, and thus we don't get as much attention thanks to their lack of complaints. No, we need something different."

Creative 3: "You are all disgusting. Don't you realize that humor is the key? I've written every single funny automotive joke that you ever heard in the series, and my contribution is what keeps the show funny, not your shock bullsh!t."

Creative 2: "Shut up and go write something funny."

Creative 3: "If it weren't for my big fat paycheck, I'd be outta here. You'll be sorry - someday you'll piss me off so much that I'll leave, and your show's ratings will go down the tube, because you'll lose my humor, which is the only thing that holds your reality show shock crap from blowing up in your face. I mean, it almost got us thrown out of (insert country)."

Creative 1: "Thrown out of...damn, you're brilliant! Could you imagine the publicity if we had been kicked out of a country, like when we almost were thrown out in (insert country)? Maybe get (dictator or president of a country) make a real assassination attempt on the TG hosts!"

Marketing assistant 2: "Perfect. We'll get them kicked out of Argentina. Make them look like Nazi sympathizers or something - we'll figure it out later. This will get us international coverage. Save the assassination for next season's sequel."

Creative 2: "Awesome! We have our ending. What makes and models of cars haven't we destroyed yet?"

Creative 3: "Why don't you idiots blow up Hammond's Mustang? That'll piss off everybody."

Creative 1: "Booyah! We'll have him destroy an old Mustang! That's an icon! No wonder we keep you around."

Everyone else in the room: "Me too."

All a big stunt.

Now, if these guys REALLY do their homework, Jeremy, Hammond, and May will quote this post on the show for laughs, and it'll probably read like this:

Jeremy: "You know, strangely enough Hammond, there are a bunch of Americans who want to kill you!"

Jeremy: "Yes! When you cut up that Mustang in Argentina!"

May: "Yes, indeed! It's all over the internet and forums!"

Jeremy: "I'm glad you mentioned that, James, for I have an excerpt here from one forum, who said this about our show:"

(Jeremy reads off excerpt of what I wrote above, adding "...yours respectfully, f*** you.")

*Audience belly laughs along with hosts*