I picked her up in 2009 from a guy in Pontiac Illinois.  My grandmother bought a 1971 Grande in kelly green from my father at Duval Ford in Jacksonville, FL.  Little did I know I would spend most of my Navy career in Jax, and buy my first mustang in 1994 in the same color from the same dealer.  My grandmother still had the car in 1993 and offered to sell it to me for 2k.  My wife at the time refused to let me buy it.  I spent the summer driving the piss out of that car in 1991.  I even managed to break the throttle cable on it.  I grew up riding around in that car, it was my first mustang experience and the body style hooked me.  I found out my grandmother sold the car to a fella in Turlock, CA for $800.  Still irritated at my ex for that...  In 2009, I was cruising the intrawebs and stumbled across this beautiful 71 429 SCJ Mach 1.  I wanted to buy that car, but being the 429 that it was, out of my price range.  I found a H code on ebay in my price range and brought it home.  I had plans to tear it down and do a complete resto-mod on it.  Time and money kept putting it off.  I was only able to do little things to her over the years.  I pulled the engine and tranny out due to the engine boiling over in Florida every time I drove it.  The original radiator had a small leak and the stop leak it put in caused the over temps.  I had tried a new 3 core radiator and hi flow water pump, but no good.  I discovered that a hole had been nocked in the oil pan and fixed with JB weld.  The left side of the oil pan gasket was missing and losing oil so bad the motor mount was super swollen.  That explained why the car was shaking like a porcupine shitting razor blades, and not some hot cam installed.  Major oil loss, problem one.  I pulled the heads because the guy I bought it from didn't know for sure if the valve seats had been replaced.  I found lots of orange RTV in the water ports.  Problem two for heat.  I dropped the heads off to have them worked and opened the block up.  I didn't have the budget at the time to get the block done like I wanted, so I cleaned it up best I could.  I had the FMX rebuilt in San Antonio back in 2013.  It took a while to save for that after the divorce.  I replaced the gas tank, fuel line, sending unit (which still isn't working), pump, and filter.  The Auto-lite 2100 that was on there was ragged out, and I was tired of rebuilding it every time I wanted to drive the car.   I swapped the intake out and threw a EB 4bbl on the 351C.  Motor runs like a kitten once the idle drops down.  The temp gage hangs out in the left side of the "normal" range.  Even in the Texas heat.  Car came with factory air and the 300 lb. York compressor.  I still have to fix that.  I did swap out the 3rd chunk due to a pinon seal leak.  The car was driven hard and the unbalanced drive shaft she was saddled with for 107,000 orig miles did the pinion and bearings a real disservice.  Since I had the rear out, I replaced the 50 year old leaf springs with a seat from Eaton at 1" over stock ride height.  The car sits level all the way down, and got rid of the tug boat look.  I changed the gearing from 3.00 to 3.73 for a little more oomph and I went with the 31 spline axles over the 28 she came with.  I called the folks at Denny's and had a custom driveshaft made right before the pandemic hit.  It took a few months, but I got it.  Installed and the car is really fun to drive.  Except for the damn p/s pump belt.  I have a fix in work for that.  For health reasons, I had to retire early.  I needed a new hobby, so I figured it was time to give my gal the attention she deserves.  I was going over the car and taking inventory of want needs attention.  Going through the interior, I discovered it is 100% orig except for the rattle can on the quarter trim panels and the dash pad.  The vinyl is in great condition with no cracks or splits.  The carpet is a little ratty on the driver's side door sill, and faded on the tanny hump; but in damn good condition.  The headliner looks practically new, and I thought it was until I pilled the quarter trim panels out.  I have a floor pan that needs replacing behind the driver, and a couple pin holes on the passenger side.  The car is 90% all original.  The wheels and I dunno who dualed the exhaust.  I think the guy I got it from spruced up the exterior paint in a few spots, so the exterior finish isn't 100% orig and clear was shot over it.  I don't know for sure if the rockers and hood are supposed to be black.  The light blue metallic is the factor color, but all the Mach 1s I seen with that base are trimmed out in silver like my hockey sticks.  Any info would help.   My sons and I are gonna pull her apart and do her up nice and try to sell her.  I've been lurking here for years to get pointers and tips.  I thought I would finally introduce myself and say thank you for all the tips over the last 12 years. I'm gonna need a few more since I am on a fixed income now. 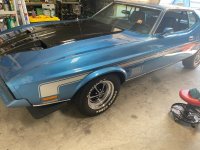 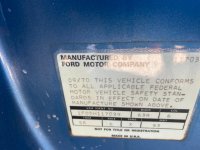 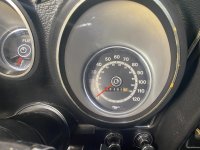 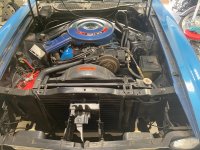 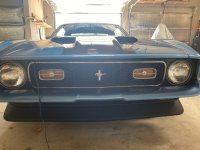 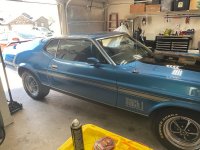 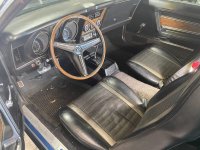 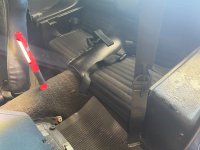 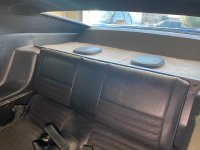 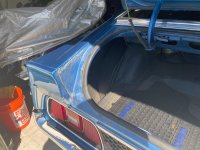 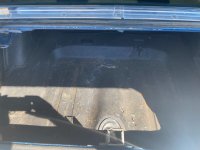 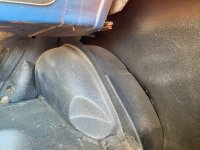 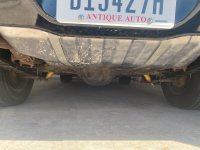 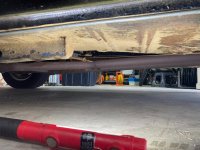 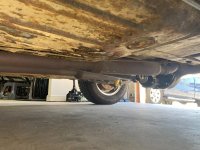 Welcome from Ohio.   Very nice looking car and great story on it. Always glad to see father son projects. Great way to build a every lasting bond and to pass the skill on.  Sounds like mostly minor stuff.  Really enjoyed your pictures.  The hood stencil looks wrong and the paint should be more of a flat black. I'm not for sure as far as the stripes.  I have seen them with both the argent and black stripes.  I do believe that the argent was standard for blue.   Some of the other members will be able to better advise you on your car's color scheme.  Keep us posted.

Thanks.  That black has been on there for a while judging by the tree sap rings on it.  Found my build sheets today.  I feel like Indiana Jones now.  Maybe I'll find some shrink wrapped Benjamin's behind the other trim panel.

Welcome from San Antonio!  It looks like you have a great car and one you can enjoy.  There is always something more to do on these cars, even if they're perfect!

Nice story and Mach 1 - many of us have been there, too.

Thanks for sharing and welcome from Germany!

Nice car! Welcome to the site from SoCal!

Welcome ... and you have my fav colour combination

Nice looking car. Welcome from Texas.
You must log in or register to reply here.

New to this, my pride and headache