Hi All,
Been busy in past days (will update my thread soon)
Came across 3 things.

First on my 71, where i'm currently busy removing the interior:

1: how do you remove the fold down?
There are 4 bolts on the front, 2 on each side and after removing these I couldn't do the expected: remove it.
Lifting it a tad, I kinda saw (hard to tell with the crap underneath it) that it may be having screws on the back.
So me went in trunk but door is in the way, so wanted remove door, but there too, the screws seams to be accessible from the inside
which I can't access because of the fold down. Not wanting to force anything (and by the lack of good light) I wonder if one can tell me how this thing goes out?

2: The car not being high enough I haven't seen from underneath, but I wonder how do you remove the emergency brake cable sleeve next to pedals that goes thru the floor.
Mine (the metal sleeve) being crusty, I don't see 1,2,3 how to remove it. Do I need pull it from underneath?

on my 73
3: Been on the road with a friend of mine, and he was behind me in his 88 Porsche 911. Let's just say it was fun
However ones back at my place he told me the brake lights were not working.
Today removed the switch, tested all electrics and on the electric side all works. If I bridge the poles of the connector, the brake lights go on.
So obviously the switch is the bad guy. But inspection of it did not reveal anything wrong. Mounted the 71's and while of course I could I have 2 bad switches, it sound unlikely.
But the thing is, it's unclear how that thing works as once on the rod, it moves with the rod and I can't really see how its supposed to activate the spring behind..
That having said, I may have that problem without me knowing for a long while, since I have replaced the booster with a Leed small one when i was looking for brakes issues.
Looking at the movement/travel and the thing having a spring. I wonder if the rod of the booster is not being too short or not having the right end shape, failing to actuate the spring loaded contact.
Can someone confirm that the switch is supposed to be actuated by the rod end? If true, Looks like I'm gonna need to remove that rod, compare to the original one and prolly weld a bead which I will then file to obtain the same shape. IF indeed the rod end is supposed to be the one actuating the switch. Another option I see, with less work, would be to add a shim and stick it on the contact plate of the switch. I don't think the contact is supposed to be electrical (ground) but more for the rod to actually push the plate that compress the spring and makes contact...
That's why some light on actually how it works would be handy.

For the brake lights, check out the pictures in this West Coast Classic Cougar link: https://secure.cougarpartscatalog.com/d1zz-13480-b-repro.html

Yes, the flat on the back of the push rod engages the switch when the pedal is depressed. If the bushings are missing the switch won't work. Also, it's not uncommon for it to be installed incorrectly.
R

To release the parking brake.

Get under the car.

That armored cable goes to a threaded stud.

Then spin the nut off the stud enough to do what you need to do up top.

I sprayed the ugly armored cable with wd40 then covered it with black heat shrink tubing to hide it.

I don’t have any pictures right now, but you can look up mustang project on Facebook From Chris Robert. I made them public so others can access. I am going from a basket case car so there are pix of a bunch of stuf.
R

Working on the car. Here are pix

@Sheriff41
thx for the reply. It's not because it was wrongly installed or better said not because I did not install it the right way.
You can't really go wrong if you indeed have the bushing and the 2 washers with the pin.
But as I said, I was suspecting the rod end from the Leed booster to be different.
So did a little spacer to test.. 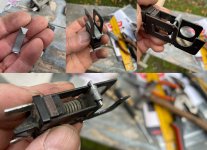 Here on pict, the first test with 1mm thick metal, and indeed the brake lights went on right away. But stayed on!
So after a good clean up, did another one using 0.8 mm/ 0.0314 inch sheet metal, folded it flat and now my brake lights work as expected.
Short story: I did not see/remark that my brake lights were not working when I've changed that booster and the Leeds end rod is obviously bits too small vs the original one.

@rcadd1ct
Brute force and lube. That was my suspicion, but thought I'd ask before play neanderthal !
Thx for the picts

And answered my own #1 question.
There are 2 screws on the back plate of the fold down. In my case they were hidden under the carpet and there were really little to no hints to locate them. Can't beat good daylight!
Fold down is now out (heavy thing!!) , same for the door as once the FD is out, you can access the 7 screws of the door hinge on the inside...

Glad you got the brake lights sorted. I like your solution!