Ok, I got a fun story for you.
some of you may remember my post in late spring of 2018 that I had bought a Fiat 124 Spider.
Welp, last year I got divorced and my wife didn't really care which car she got, so I gave her the 124 and I kept the VW GTI because I also kept the house and, well, sometimes you need a minimum of room to haul something.

I've missed that car ever since  and decided one day I'd get another one of those. So two weeks ago one showed up at my local Fiat Dealer but I hesitated too long and it sold just a few hours before I went there.
So now I was bitten by the bug and looked online. Turns out there's one at a BMW dealership about 20 kilometers from my place. I immediately haul ass so that I won't miss that one too.

During the test drive the car felt utterly familiar and I could swear I smelled a whiff of my ex wife's perfume from the heater vents.....

Well it turns out, I bought my own car back. In a twist of fate, my wife had traded the Fiat in for a new BMW just days prior without my knowledge.

I called her and we had a good laugh about it. I can hardly wrap my head around this case of serendipity. I wanted to get another 124 but as is often the case "sometime in the future" ... if it hadn't been for the one on display at my local dealership I would not had started looking into this and that happened just after my ex wife had traded hers in, also only because they offered her a great deal as she was not planning on getting a new car.
A few days earlier and the car would have been sold or a few weeks later I would have settled into the "I'll look for one.. someday" routine.
So now I got my old car back, she put less than 1500 kilometers on it while she had it, and I have a year warranty from the dealership as a bonus.

I should have bought a lottery ticket at the same time, now that I think of it. 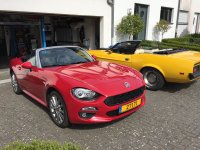 A story similar to yours (which, BTW, is a great story!).  A woman was looking for a used Mustang after getting rid of hers a few years earlier.  She responded to an ad, and went to look at it.  It looked quite familiar, and had an identical fender damage to her old one.  The owner asked her if she wanted to test drive it, she said yes.  The owner said let me get the keys, and she responded, "I have my own."  She got in, used her old keys which she had with her, and started the car and went for a test drive.  The owner was astounded!  She came back and told him the story.

I read this somewhere on a Mustang forum...in the Internet, so it must be true!

I like the new 124 spider. A friend has a 500 Abarth Turbo that keeps me thinking about getting one of those. The problem is it sounds too much like an idling tractor.

Wow!  That's pretty bizarre, and very cool at the same time.  Good for you!

One thing that I found particularly cool is that you were able to call [former] Mrs. Luxstang and have laugh over it.  Also, Good for you!

Great story.  Come to papa.  Need to change your name to luxystang! :lollerz:

One thing that I found particularly cool is that you were able to call [former] Mrs. Luxstang and have laugh over it.  Also, Good for you!
Click to expand...

Yeah, that's the only positive thing with this divorce situation. We're getting along quite well and there's no hate or spite.

Luxstang, just one thing about FIAT...

Very cool story,  and nice addition to the stables.

Cool story, good to see exes that get along amicably. A good friend is going through a divorce right now and his wife has dragged it out to over a year so far.

Hemikiller said:
Cool story, good to see exes that get along amicably. A good friend is going through a divorce right now and his wife has dragged it out to over a year so far.
Click to expand...

A friend of the family had a good way of describing it. A couple can figure things out amicably between themselves, and the lawyer just makes it official. OR they can fight about it forever, and then the lawyer gets most of the stuff.

Wow, what a weird timing/coincidence.  Glad to hear you got your car back.  Hope you are doing great!

When I got divorce wife could not get any of the cars I had before marriage but she did get the 1984 20th. Anniversary Mustang we bought while married. So after it had probably 200,000 miles on it I bought it back from her for $3,500.
Did not have to change title since my name was on it, lol.