Where is the best place to get a stencil to layout the proper hood paint and stripes on a 72 Mach 1? I've seen so many that were not correct, and it stick out like a sore thumb. Any advice will be appreciated.

You are very correct. NONE of the current supplied stencils are correct it seems. The info that MM has is also incorrect on the position of the paint.

My original car is in the MOM, Mustang Owner's Museum in Charlotte so I cannot just go out and do a pencil rub off for you. I did for another member if he sees this maybe he will offer to sent you the rub I sent him. I did take some picture with ruler on the hood before I took the car to the MOM.

I have not seen any correct types of paint either. With the new 2 pack paints I do not think there is a way to get the proper finish.

Here are some pictures and you can go view my car at the MOM if in Charlotte.

Do not believe any of the vendors if they tell you they are correct. This car has 12,301 miles on it and I ordered it new one owner. I do have a couple more original hoods in storage might be able to get one of them out.

BTW that car has not been washed with running water in 37 years. I just use a bucket of water and wring out micro fiber towels. Not buffed either. Paint is full of factory defects, dust and dents. They were far from perfect. I think the hood black is 7/16" out of center but you do not notice it even looking for it. 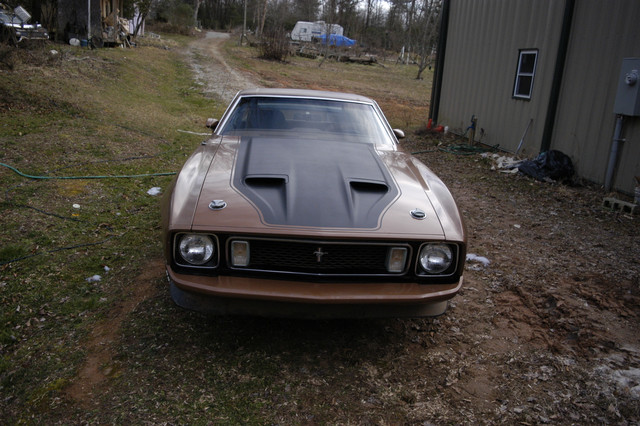 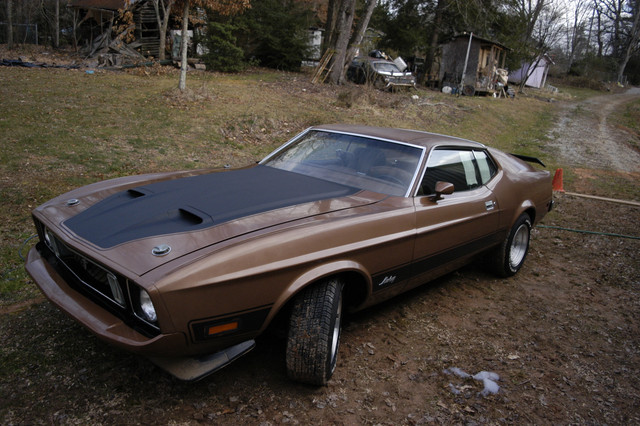 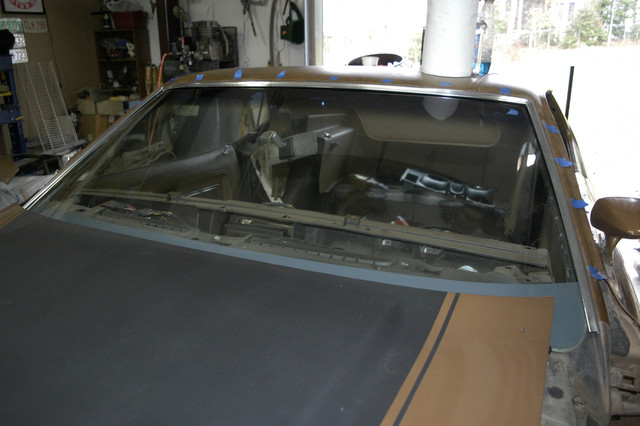 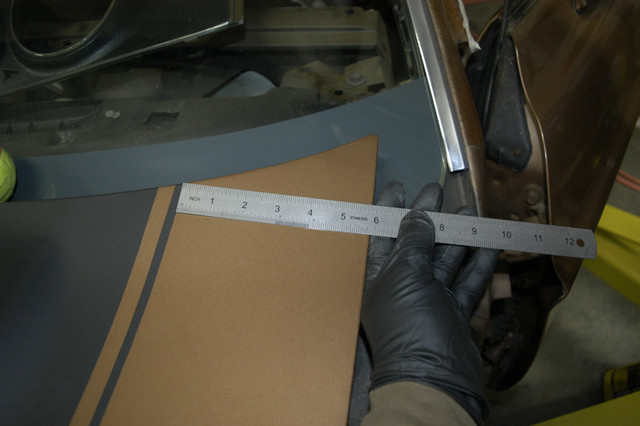 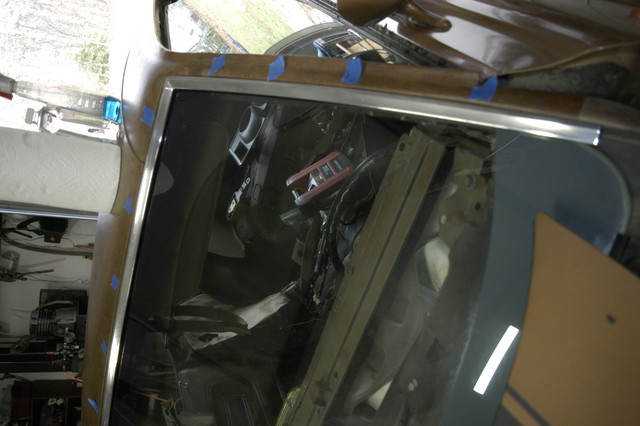 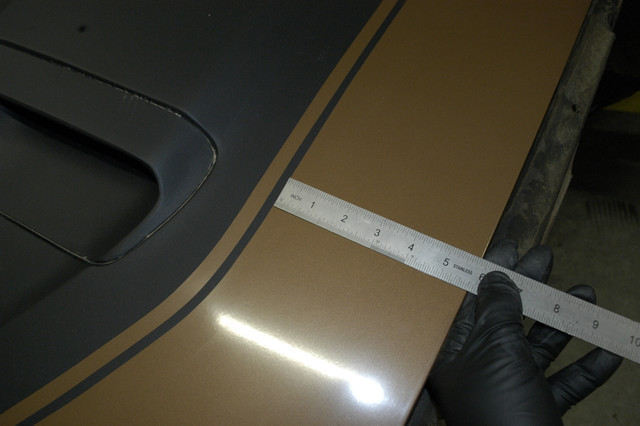 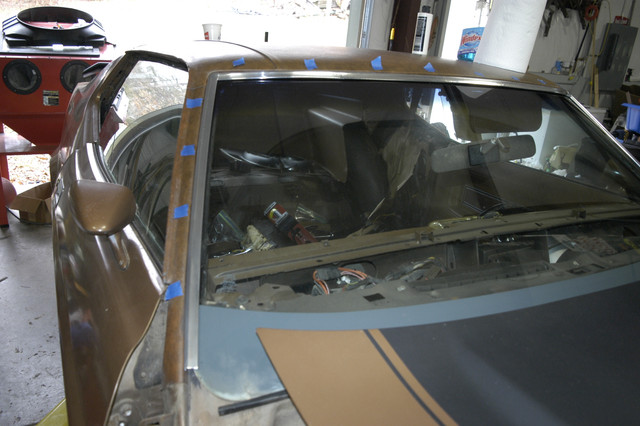 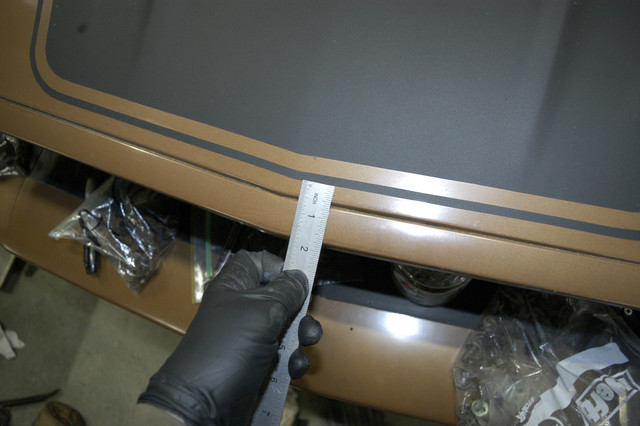 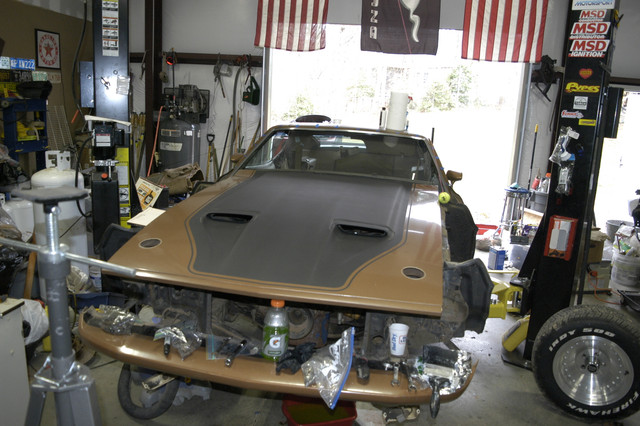 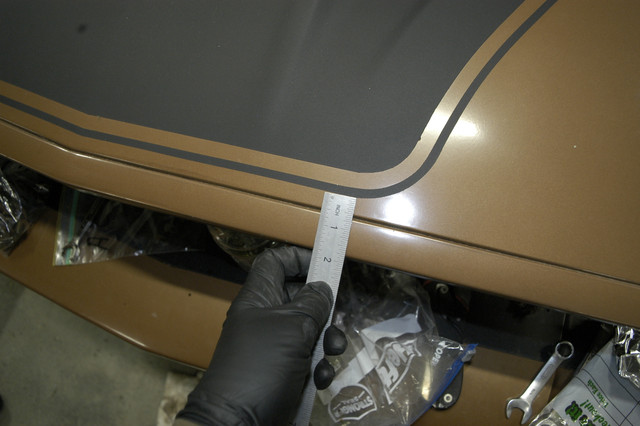 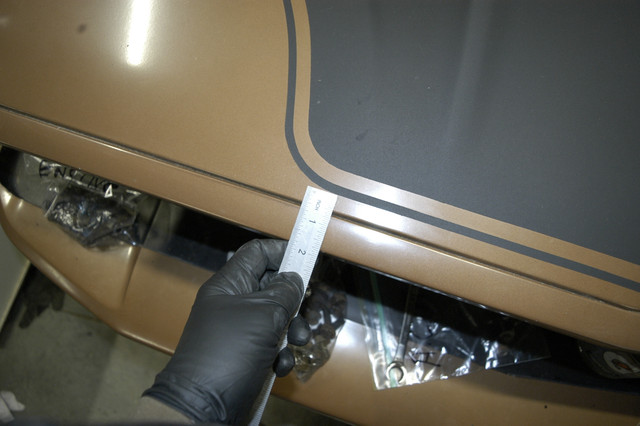 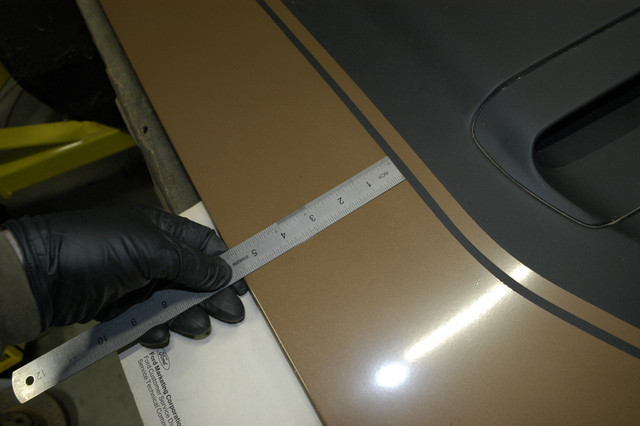 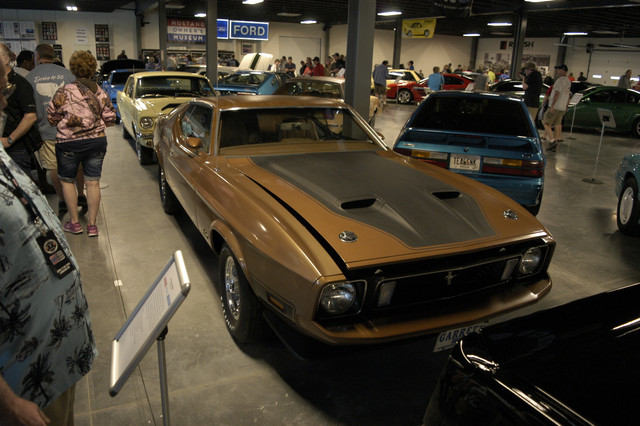 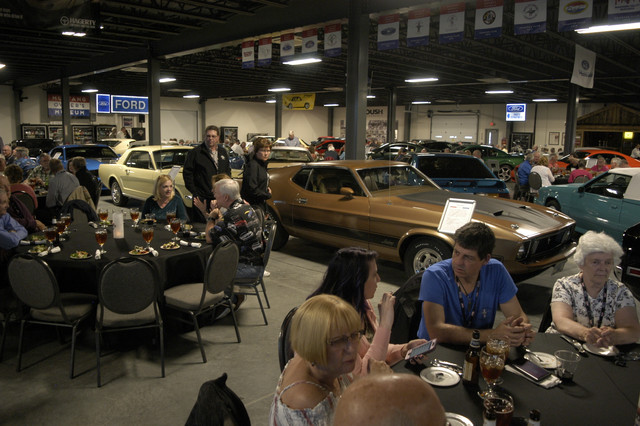 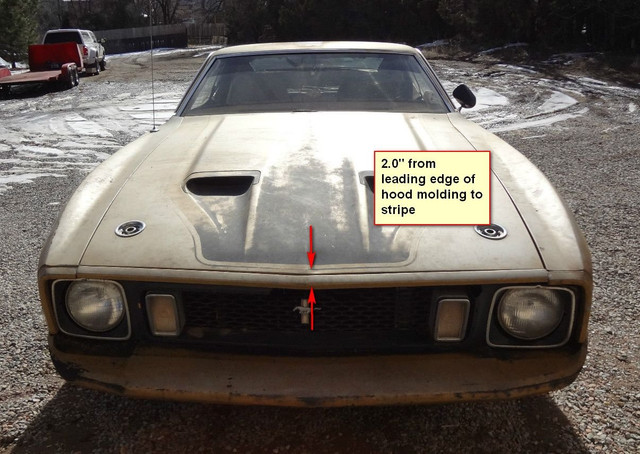 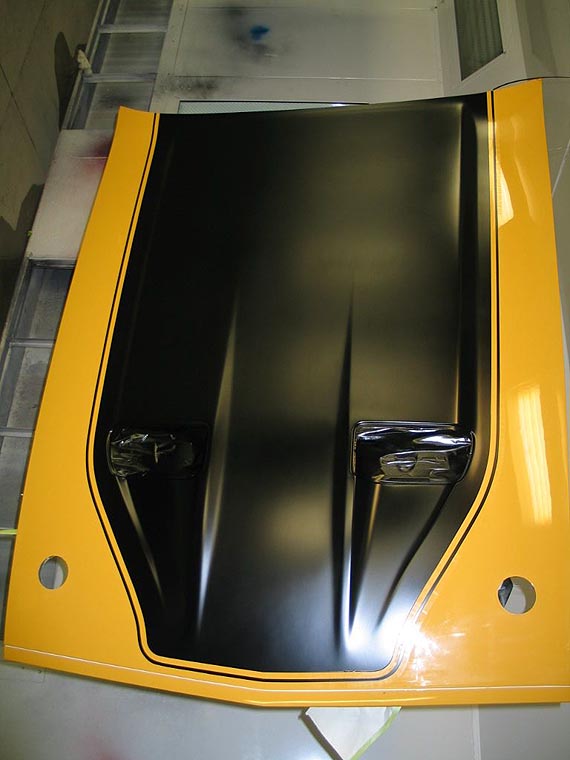 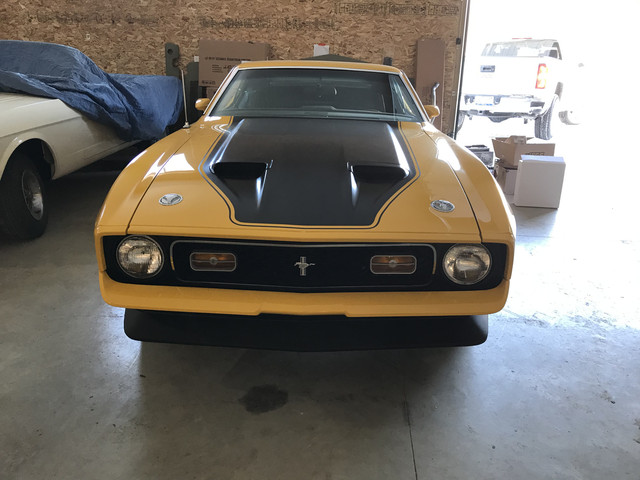 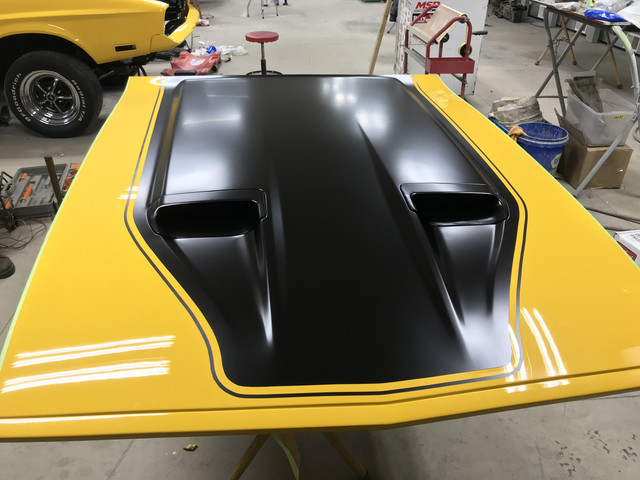 Ya along with David’s pics I have some too. There’s so many that are wrong and a lot of them is because of a misinterpretation by a Mustang Monthly article. It says to set the hood pattern back 3” from the leading edge of the hood when it should be 2”. If ya do the. 3” back from the front it screws up the entire pattern. Here’s a few more pictures that aren’t correct.

I wanna show off my hood too!

My hood is not correct I chose to narrow it up by a half inch. Just think it looks better. The front edge is correct.

I wanna show off my hood too!

My hood is not correct. I chose to narrow it up by a half inch. Just think it looks better.  The front edge is correct. 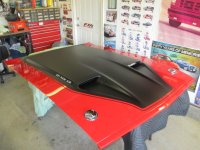 We all know that there is variation in how the cars were built. If you only had less than 2 min. to do your job it will vary for sure. Was probably done in couple stages maybe two people applied the stencil and then sprayed in another area. In my pics you can see that the black on this hood was 1 3/4" back from the front edge. Would be nice to talk with someone that actually worked the line in that area to know exactly what they did. The very first Boss cars had the regular paint on the hoods not the squared out that production had. I have copy of magazine with the Boss testing in there and it has the normal hood black and also says Boss 302 not Boss 351 but had the 351 in it. Guess that decision was a last minute detail for sure.

You can never say never on how cars were built especially back then.

Attached a couple of the pics from the magazine article, October 1970 Super Stock.

SLO-RIDE, another area that causes grief for 71-73 owners. As David posted, the assembly line is a fast paced world where line workers only had seconds to perform their tasks. The paint room was lucky if they even had two minutes to place a multi piece stencil and paint before the next piece came through. In that type of environment it was inevitable that variances were going to be found. As I have posted before, Ford, along with the other manufactures were in the business of mass producing cars, trucks and service parts, not show cars. I'm sure not much thought was given as to what someone might find in or on one of these vehicles 50 years later!

Just about anyone you talk to that has a original two tone painted hood has noticed off center measurements to the rear of the hood.

I was with of group of dealers that toured Atlanta assembly and it was definitely an eye opener. Things were so fast paced that it reminded me of the old I Love Lucy episode where they are working on the candy line that is constantly speeding up. (Some younger members are probably thinking Lucy who)?!

I would check with Graphic Express. Kit Sullivan was a forum member here and is a original owner of a J code Mach 1. Graphic Express photographed and measured  the blackout on his hood and the template they sell is a product of those measurements.  For some reason the picture they use to illustrate the hood accent is a stock picture that a lot of the decal and stripe vendors choose to use and is not the correct look. Don't know why they didnt use one of the pictures they took of Kit's hood. Guess they figured they didn't need my permission on which picture to use!   :whistling:

They show in stock and on sale! Good luck with your project.

After two unsuccessful attempts by my painter freehand... I used the Graphix Express stencil. We still had to cut it so as to properly fit it on the hood to meet the factory measurements (taken off my original blackout hood paint). Unfortunately, my painter still did not understand what imperial measurements are... He screwed up one area by 3/8”... I gave up and took the car home. We haven’t talked in a year... So, yes the stencil will work, you may have to adjust to your needs. Good luck.

My painter messed mine up using a Graphix Express stencil as well, but it was a compounded problem.  First, he sprayed the whole hood black, and went to apply the stencil several hours afterward (Strike 1: he didn't get the clue that the TuTone was added AFTER the body color, and the paint was barely even dry).  Then, he misread the instructions and placed it with the leading edge of the stencil lined up with the leading edge of the 'pretty part' of the hood sheet metal - without the nose trim piece in-place (Strike 2: couldn't follow the simple instructions printed on the stencil itself).  Finally, he didn't bother to find the side-to-side centerline of the hood, and put it on too far to the passenger side... but it's already stuck down at this point, on barely ready-to-go paint, so the template's either going to pull up the hood paint or become stretched and unuseable during the process... or both (Strike 3: still can't follow instructions, doesn't have 'the eye' for such things, and can't or won't measure things properly) - the body guy said, "Hey - it looks good to me."  Yeah... wow.

The passenger side looked OK - maybe a little too far over, not horrible... maybe around a half inch or so - I can live with that.  The driver side on the other hand, looks like a lot of those jobs where the painter just decides to eyeball it and winds up cutting it too close to the raised area.  Oh.  My. Gawd.  I almost lost it.

At that point I took matters into my own hands... literally (I've striped about a dozen cars in my time with tape stripes and paint... I'm 'pretty good' at it... not an expert, though).  I managed to cut away the part of the stencil on the driver side without pulling up the hood paint and hand-striped the whole driver side myself.  After measuring against the passenger side, I was happy with what I wound up with, only to find out that he had the body guy (who had said earlier that it looked good to him) mask off a 'negative' image of the stencil to protect the black hood paint while he shot the body color - he basically pulled up everything I'd done, which looking closer now, I can definitely see where he'd not gotten some of curves as fluid as I had.

I'm thinking that based on how much I had to add to the driver side, and it still came out pretty close (aside from being too far back and glossy), I think the Graphix Express stencil might actually just be 'close,' as 7173Vert mentioned... but, it's better than nothing.