I am finally back to work on my cars.  I took about 10 years off doing stuff with my kids and now with the pandemic and not traveling for work I’m looking for stuff to do.  So, i got to work on the ‘72.  It started with the grill repairs and progressed to the damaged bumper and fender.  My question is about the bumper.

Does the urethane bumper have a steel core inside? I removed the steel reinforcement/mounting bar and the bumper is still pretty solid and heavy.  Can it be bent if I carefully back it up and press it?  It has a slight dip down and bow backwards where it impacted something.  I was planning to use my press with a long backing bar to ensure it bends where I want it to and not cause more damage.  Thoughts?

Well, since nobody seems to know—the answer is yes.  You can bend a stock 71-72 front urethane bumper and restore its shape.  I need to figure out how to bend the ends in just a bit and it will fit better than when it was new.

69 Rustang, were you ever able to figure out how to reshape the urethane bumper?  The ends of mine are also bent out a little.  I would love to learn from your experience.

After studying it further, I am going to put a bit more bend in the middle.  That will draw the ends in.  A small change in the middle will make a big change on the ends.  I decided that it is unlikely the ends could be bent/out of shape—it has to be a shape problem elsewhere on the bumper.  I realize that they didn’t fit perfectly when new, but my intent is to make it fit and look better than Ford did.  I suppose I should take pictures before, during and after—but I tend to get impatient and just get to work.

Interesting @69 Rustang...I was thinking the same thing.  Mine sticks out by 1/2" on one side and I thought moving the center forward may pull the sides in.  I have two issues:


Any thoughts on breaking the bolts loose?  Also, would love to know how your adjustments turned out.

Nick, my bolts were frozen too.  I tried soaking them and even tried a little heat, but the heat quickly affects the urethane of the bumper so that was a no go—don’t go there.  In the end, I found that NPD and CJ Pony parts both sell new bolt kits for about $25.  So, I drilled them out which was quite easy to do.  A good friend who is a very experienced body man stopped by the other day and asked to see my project.  We were discussing the bumper and he agreed on bending it in the middle a little more.  For the ends, he said if they still stick out:  1) they never fit well when new (an answer I don’t like, because I want mine to fit!) and 2) to bend in the ends, he suggested attaching weight to the bumper and drop/pound the end of the bumper into a piece of wood on the ground.  It will make a mess of the urethane and any paint, but that can be fixed.

you have to reverse what bent it. Someone probably gently ran into something while parking and it bent at the center contact point.

My rear bumper is like that. I have bumper guards and Someone thought that would make it ok to push it with another car, long before I owned it. The center is pushed in and the ends stick out. Easy fix for me because I can buy a new one for $100, but you guys are screwed and have to salvage what you got.

One of my next projects is a new front and rear bumper.  The main problem will be getting the giant Phillips head screws drilled out to get them loose from the brackets.  Im not looking forward to that, but at least I can do it on a bench and put the torch to it.

Cant these parts be made ?

With the new format I just saw this. So I could have told you yes there is a steel core inside the 71 - 72 rubber bumper and huge one in 73. I bought a crashed 72 vert that had NOS bumper and brackets just installed and it is all twisted. NOS but cannot fix.

What I learned today:  the ends of the bumper bend pretty easily.  I did a bit of fitment work today.  First I set up on the press and put a hair more bend into the left/center of the bumper where the initial damage was.  Then I worked on fitting the ends and the bumper brackets.  To bend the ends, I just held the bumper up vertically and dropped it on a piece of cardboard.  The first time I put a little effort into it and learned they bend very easily—too easily in fact.  So, big hammer and bend them back out, then some fiddling and I am really close.  I need to do some minor tweaks, but it is aligned with the fenders.  I need to do a bit more straightening on the left fender but I am going to achieve a very nice fit when I am done.  Some pictures... 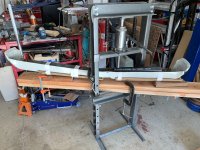 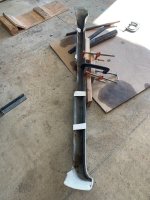 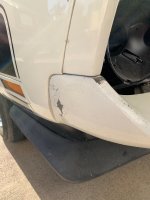 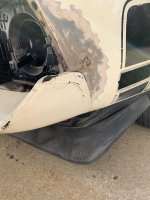 You need a gap or vibrations will eat your paint off.

I can adjust in the smallest of gaps, thanks for the tip.