View from my workroom where I sand and paint, yesterday. If you do not like hunting do not open.

I went to the Dr. on Wednesday and got checked from my surgery. I ask him if I could go hunting, lol. He said as long as I did not lift over 10 lbs.. So here in N.C. it is muzzle loader season and today Saturday was a doe day. I got up early yesterday, early being 7:00 am, lol. I fixed me thermos of coffee got some snacks and went to the garage. Had me a comfortable chair and rest for my Winchester .50 cal. muzzle loader. I had not shot since in Africa with it about 10 years ago. I had put up target and shot a couple times on Thursday. I had poured some corn and Deer Cane out about 75 yards from my window. 3 does and a yearling came and ate the corn and dug in the dirt to get the deer cane.
I got bored about 9:00 and did a couple things in the garage and came back to the window. I looked at phone and it was just after 10:00 decided to call it a day at 10:30 and I sat down and spotted a deer. It was a buck and headed my way. I got the rifle up cocked and wresting on the box. I had the cross hairs on it and when it was about 125 yards squeezed the trigger and the smoke filled the air. I reloaded and walked down it had ran toward me and was only about 50 yards away. A nice 8 point and was really fat. Never seen so much fat on a deer, 2" thick in some places. All the neighbors put corn and feed out for them way too many. So I got help and got it to the garage and used the two post lift to string it up and skin. It is too warm here to leave hanging so I cut up and put on ice in zip locks to age it some.
The neighbor got cornered by his bear again last week had to get in his truck. I have a bear tag but not open until November. My big game, small game, fishing, game lands use permit and bear stamp cost me $11.00 now. I have hunted as long as I can remember bought my first Winchester from local alcoholic for $10.00 when I was ten years old. The local store would sell me bullets did not have to buy the whole box. I would get maybe 5 or 10 rounds and go squirrel hunting.
I went and got my pup and put him on leash. I got down wind and he smelled the deer. I put him down and he went right to it and was all over it, lol. The one wheeled cart was one of my inventions back in the 80's. Tried to patent but there were patents back to the 1800's that were similar. Weights less than 10 lbs. and we have taken two deer on them before. Been to Canada, Montana, Georgia, South Carolina and I took one to Africa in suit case and left there. You carry no weight just balance. You can see the top of the heart is missing, 260 grain hollow point jacketed bullet with 100 grains of pyrodex.
So nothing but squirrels today so I sanded the R.H. quarter panel and touched up some dents with filler. So for the remainder of the season I will have some kind of rifle in the workroom and look out. I think I got two doe tags and 5 buck tags, one bear and two turkeys. 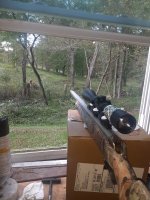 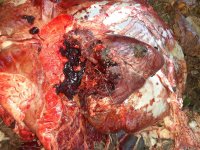 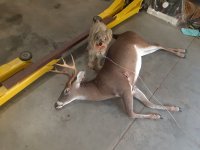 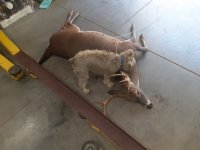 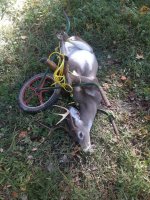 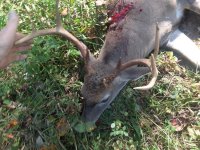 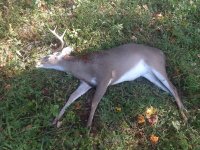 Nice looking view and a very nice buck.  I haven't been hunting in more years than I can remember.  Was more into bow hunting for deer.  Still shot my pistols and rifles.   Never had a muzzle loader but have been thinking about it lately.   Was thinking about buying  45 or 50 cal kit to build.

My dog is hopefully one my my local buddies will get one this year and give her a leg.  I think she likes deer legs even more than chorizo which is saying something.

LOL they do like to show their power over the deer. I salted the hide today and fed him some of the trimmings. There are way too many deer here. I had to chain link fence my garden and they eat everything.

Nice buck David.  My son missed one with his bow Saturday. Archery season just started here in PA.  Do they allow baiting during the season down there?  They don’t allow it in PA. Would make it a lot easier here!! lol.

You can bait on private land but not on Game Lands. They love to eat azaleas so all the neighbors have them eaten up. There is a power line right of way about 200 yards into the view. They have been trimming the trees last few days so did not spend any time watching.

C
Well home from the surgery look like I am good to go.

Dec 8, 2018
Carolina_Mountain_Mustangs
C
C
Getting the 73 Mach 1 out of the trailer after couple months.