Well I bought them some time back, but the thought of cutting holes in my hood kept me from getting to this project for some time. Well Sunday I decided that it was time to either do it right or mess it up.

First I mounted the brackets. I removed the hood adjusters and the brackets installed in holes that ford equipped the car with. The kit did not include the hardware to mount these brackets, but thankfully I had plenty laying around. Install these brackets loosely as you will need to adjust them later.

The bottom side of the hood has two circular cut outs of about 4 inches. From under the car I looked up with a flashlight and was able to see that the hood cut outs were located appropriately to the brackets.

Using a 3" hole saw from underneath and centered in the opening I drilled the center pilot hole on each side.

I laid newspaper under the hood and closed it and taped over the area to be cut with clear packing tape. Using the hole saw with light pressure and moderate speed I cut both holes with no damage at all to the surrounding paint. I peeled up the tape, used a bit of sandpaper to clean up a few burrs and painted the raw edge of the metal.

Before installing the hood locks, I took a file, chalked the teeth to keep it from loading up and removed some light flashing around the bottom edge to ensure that I would not damage the paint. Actual installation is simple enough with just two screws on a retainer bracket on the back side.

The next parts to install are the "strike plates" these again are held in place with two small screws and should be installed loosely. The provided screws really need larger washers so I headed to the coffee can of hardware and found four likely candidates.

Now comes the tricky part you do have to align everything to get acceptable operation. With everything tightened just snug so it would only move with intentional pressure I crawled under the car and used a flashlight to check alignment.I started with getting it close side to side then tightened the hood adjusters and the upper bolts on the brackets completely. This leaves the striker plates still loose and the lower leg of the bracket still a little loose. Next I repeated the procedure and adjusted the strike plates fore and aft and snugged them down. Now with this adjustment the only remaining adjustment was height. I twisted the locks down, latching them, and measured the amount the locks sat above the "cup" they sit in. I then opened the hood for the umpteenth time, and pushed the bracket down and tightened the final bolt on each side. Again I crawled under the front of the car and inspected alignment of the pins to the strike plates and made some final adjustments.

Drilling thru the paint is not a big deal if you r paint is in good condition-juse sensible precautions of taping the paint and using a fresh sharp drill and no more than moderate pressure or speed..

Tape the hood latch in the open position while you are working as you will raise and lower the hood a number of times.

plan for the hardware that does not come with the kits.

The hood pins thread into the lock and lock with 9/16 nuts This does allow you to alter the depth a bit in your install. If a hood pin becomes trapped in the latch somehow and you keep twisting counterclockwise the pin will unscrew. Snug this part down and keep an eye on it, it might require a drop of locktite, but you could end up with a hard to unlock hood if there is ever any misalignment induced by percussive influence.


and I am new here so be nice 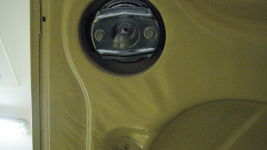 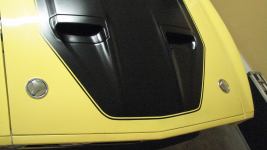 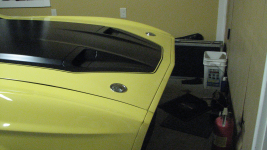 Great job. I concur on all the above. I did almost exactly the same.
It is a shame all the money you spend on the locks and brackets and the supplier CAN'T provide (4) tiny screws to mount the locks, let alone the (6) for the brackets!
A side note on adjusting these, make sure your hood is where you want it to be with acceptable gaps, otherwise you will be doing this again. I would also suggest installing new bumpers prior to the installation.
J

all your suggestions are good ones. Now when can I get that beer?