Thought I would give you the complete story on my mustang problem. Over the last 3 years, my 73 Mach (351C) has been running poorly after the engine warms up. I did all of the usual stuff - replaced wires, distrib cap &amp; rotor, fuel filter, fuel pump, new Holley 600 carb, continuity checks, etc. I couldn't determine if I was having a fuel or ignition problem so to help eliminate whether I had a fuel line problem, I ran the car using an auxiliary (3 gal. outboard motor fuel tank) fuel source. The engine ran just as badly using my auxiliary fuel tank so I was leaning towards an electrical problem. I have a Petronix II ignition set up. I was in the process of checking the timing when I dropped my 1969 Sears Best timing light and broke it - almost like losing an old friend.  At this point I decided I needed help from a real mechanic so I made arrangements with a buddy in Michigan who is a retired UPS mechanic. He and I are the same age so he grew up working on 60 &amp; 70's Fords.

The great thing about my buddy is he doesn't just start throwing parts at a problem. After checking all the grounds and with the engine running, he placed his head as close to the engine as possible and started jiggling wires - one at a time. When he moved the distributor red/black wires, he said he could hear a difference.  I couldn't hear any difference (he wears hearing aids) but I just nodded and went along. He checked the distributor module gap which was set at 60 thousandths. He then called Petronix to see if the gap was correct. The Petronix guy said that the gap could be between 10 to 60 thousandths. He also stated that since the car started and ran, the problem wasn't in the distributor. My guy checked the continuity between the battery and distributor again which was fine. He wasn't satisfied with the '10 to 60 thousandths' answer so he called Petronix again and spoke to another rep who stated that the gap should be set to 30 thousandths. He re-gapped the module and the engine ran a little better. The timing strobe was still showing significant pauses so my buddy said he thought we should replace the distributor module.
When the part came in and he replaced the module, the car's problem was fixed. He noticed a small burn mark on the original module's red wire.  Adjacent to the burn mark, he noticed what appeared to be a single strand of wire protruding from the black wire.  This was no bigger than a hair – I painted it so it would show up in the picture. For whatever reason, the exposed wire was probably shorting out on the red wire whenever the engine was running hot.

What I discovered later was that the protruding wire was in fact not a strand of wire – it appears to be a metal shard. The second picture is the shard next to a penny. I think the module was defective when it was made.

Guess it makes a difference who you talk to when diagnosing a weird problem.

Anyway, the module replacement cost was $120 plus $60 for mailing.....and three years to figure out. 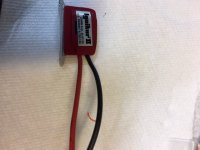 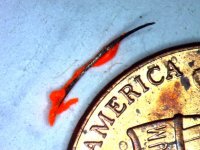 Very strange problem cause. Glad you found it. Chuck

Good story and hats off to your bud for figuring it out!

Great to hear you both figured it out! What a long time... It is often the small things, much overseen. Glad it has come to an end  :thumb: