Hi all, I'm a new member and thought I'd introduce myself and my project. I have a 73 Mustang coupe that I originally bought for my son to drive in HS. We were just going to give it a quickie paint job and go, but after starting to fix a few things we changed our plans and decided to completely restore it.

It was a Grande, but we're going to change it into a 71 Sports coupe. I think that's kind of a cool and rare style. It has a 351C/FMX, but I may change to a toploader as I'm a big manual shift fan.

The first pic is what it looked like when we got it. I found out after pulling the fenders that it had been hit in the front and the radiator support and left apron were pushed back an inch or so. Plus the left apron was rusted from battery acid leakage.

The next pic is where it is now. So far I've replaced the support, both aprons, left lower quarter, both rear floorpans, a small patch in the drivers pan and some metal under the rear seats. I've primed and blocked it twice, and primed it once more. I'm getting ready to do what I hope is the final blocking before paint (I hate body work, just can't afford to pay for it).

The last pic is what It'll look like when it's done, hopefully. 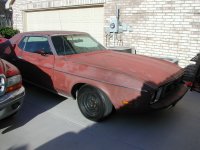 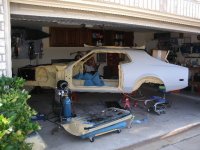 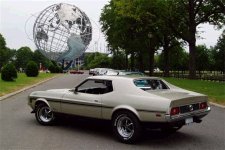 Hi Darell and welcome to the site. ::welcome::

That coupe in the last pic looks cool. That´s a nice goal you set yourselves there.

It would appear that you have gotten a very good start on your goals for your '73 Coupe. I really like your planned approach to the project.

Again, Welcome and I look forward to interacting with you on the individual Forums.

::welcome::Welcome from the coast of North Carolina. Car is looking great and if you get in a bind, these guys know or can find the answer. Good wrenching.

Welcome to the forums! Very nice coupe! Keep us posted on the progress!

::welcome:: to the site from central Oklahoma (Mustang). Looks like you are making really good progress. Keep up the good work. Chuck

I love your vision!

Welcome.. Looks like it will be a great transformation.

and welcome from the land down under

Welcome, looking good keep it up.

Welcome to the site! Looks like your making great progress and your doing it right!

::welcome:: Cool project, where are you from in North Tx I lived in WF for a while.

Welcome! Nice work &amp; going to be a nice looking car when done.

::welcome:: from the Midwest!

Thanks for the welcome and encouragement guys.

Tnfastbk, I live on the north end of Lake Lewisville, not too far from where you were, if you meant FW (Ft. Worth).

Chuck, I grew up not too far from you. Lived in OKC and spent a good part of my early childhood in Bethany.

No I was in Wichita Falls, did some gaurd duty in Grand Prairie

Winter. Need heat from the heater.