Hey all, I'm Cameron and I live outside Albuquerque, NM. I recently reacquired a 1971 Mustang convertible and am in the process of getting it road worthy. I was originally restored in about 1991 by my father. He was in the autobody industry from the time he was 14 years old and had his own shop from 86-05. The car was supposed to be my first car for high school but ended up too nice and he didn't want it destroyed in a high school parking lot. I ended up losing interest in the car and it sat in a garage for many years. We recently had it at our fabrication shop and again we had to do something with it. He wanted to sell it and I'm at a point now where I wanted to keep it and modify it to be a Sunday/summer cruiser.

I took the car to a friend who went through it to get it running again so I can at least move it under its own power, and he just finished with it. Had to install a new fuel tank, fuel pump, float, spark plug wires, all fluids, and tune it. It runs super smooth.

The car has a 351C that was swapped into it by the previous owner. My dad didn't do much engine work to it other than a new exhaust and basic maintenance. He was a hell of a body and paint guy though and with a light detail it will look like a show car again. I am hoping to build the 351 to make a little more power down the road and upgrade to disc brakes, maybe a more modern suspension, and install a nice stereo.

I'm hoping to learn a lot about these cars because I haven't done much research until now. First upgrade I need to do is new wheels and tires. I want to get rid of the ugly American Racing wheels that were put on in the 90s and desperately need new tires, these are from around 1991. I'm open to suggestions. I'm going for the restomod look since the car is far from original colors and not numbers matching. I've been looking at US Mags Rambler U121 which are black with a polished lip or the same wheel U111 in gunmetal grey. Looking to go 18x9.5 in the back with 5.25 back spacing and 18x8 in the front with 4.5 back spacing. Anyone know if this will work? 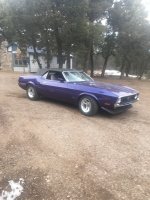 Nice! Welcome and you will find many tire/wheel related discussions here on the site.  :welcome:

Welcome to the forum from North Carolina. Glad you kept the vert. I have several.

Welcome from Illinois!  It’s always great to see another vert here - I’m glad you kept it and plan on driving it.

Supercool car, brother. Glad to hear you want to keep it. I have 2 verts myself and I never tire of looking at them.

Welcome to the fold from League City Texas!.  Hope you can get it fixed up to yore good taste.

Hey Cameron,  I'm in the East Mountains and also have a 71 convertible. Do you need any parts? I have some left overs like everyone else. I learned alot of wisdom from this site. Good folks !!

The guys around here will be able to answer just about any question you have.

Welcome from MO (and a fellow very owner). Sounds like you have a nice history with the car which makes it a true treasure!

Hey Cameron,  I have tried to call you based on your text number but it says your mailbox is full. I'm in Sedillo, so we are nearly neighbors. I don't text so I will keep trying to connect via phone.  Ed 250-5798

Welcome from PA. Lived in Abq for 15 years. 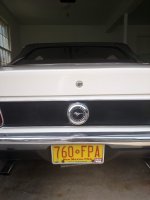 Welcome from another convertible guy in west Michigan.

Top down therapy is best!

Nice and easy project to start with, looks good! Changing the wheels would meet the exterior more than these 90ies sins, agreed  :thumb:

Hope you will find the right combo soon. Perhaps you should make a new thread onto this...

I see there is not only alien spaceships in new Mexico. Nice real ship you got there!

Superb car you have there. Welcome to the forum! I'm new here as well.

N
New member eager to learn from this forum!
2