I posted these in my thread on my Mach 1 build but thought it should be brought to everyone's attention.

In the cleaning of the car it is apparent it would be easier and faster to replace the lower control arms. The ball joints are great just close to the ground they rusted really bad.

So since NPD in in my back door I got on their site to order several items to help in the cleaning and detailing of the Mach 1. I selected the Drake lower control arms said to be "Concourse Correct". Somehow from picking the item to check out the quantity went from two to one. So I got them package this morning. Thought it was going to be a great day get the spindles back on and some of the suspension, NOT.

When I discovered the one instead of two I knew I wanted to order some new clamps for the heater hoses. I took the parts I got to garage and took some pics of the clamps. While there I picked up the old lower arm and put by the new. I thought OH S&amp;%$. There is a formed washer that is formed into the control arm for the front sway bar to bolt to. The washer locates and seats the rubber bushing for the sway bar. The idiots in China put the bushing on the wrong side. Drake obviously does not quality checks and when I called NPD they said they had hundreds just like it. I also looked on other sites and their pictures show the bushing on the wrong side.

When I was talking with the NPD guy he said "What do you want me to do"? I said make the parts correct. Of course nothing he can do.

I am going to contact Drake and if they ignore me go to the NTSB. Altering an important component in a cars suspension not tested could cost you millions if something was to happen.

These idiots have to start to take this repo business serious or get out.

Here are pictures of the new part and old. I have no choice but to use them but will push the issue to my limits. When I get pissed I get pissed.

Out of the last 5 orders for car parts all five have been wrong. Parts Geek is not even talking to me and I have incorrect parts, wrong shipment of parts and double charges from them. I hate to order unless I can go pick it up myself, see it and know it is right.

If any of you have replace the lower control arms go look to see if the bushing and seat for the rubber parts is on the right side and let me know.

BP was high today I am sure. 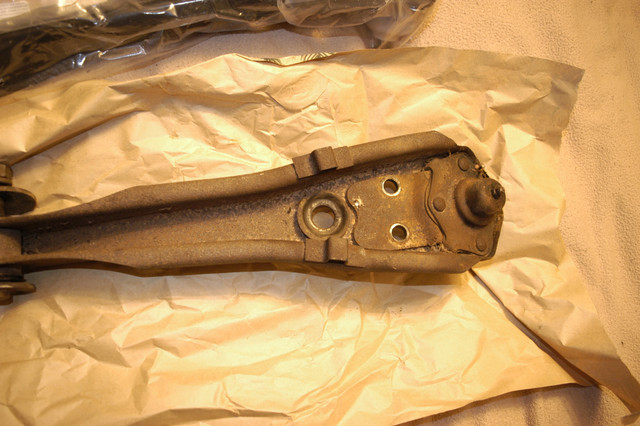 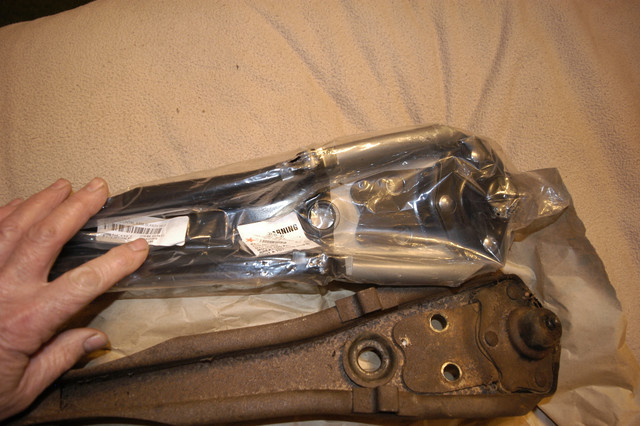 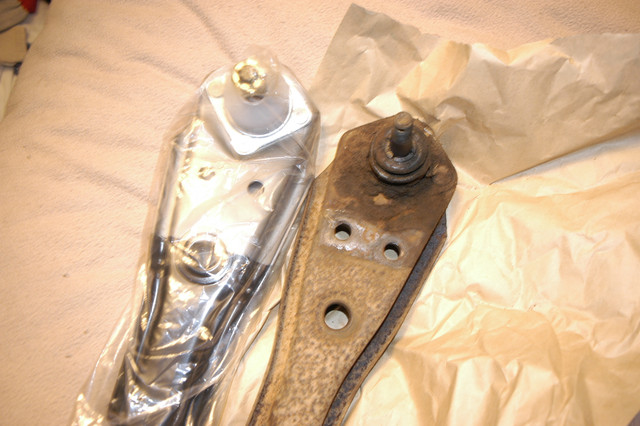 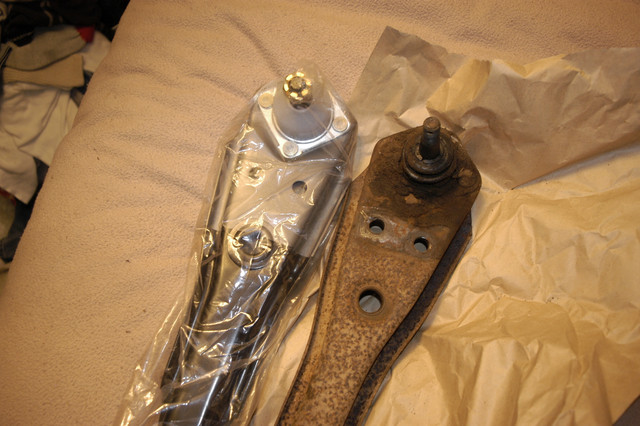 I seem to recall that the one's I got had the washer and cotter pins in a separate plastic bag and it was up to you to install the washer where you wanted. I remember that because it took me a while to figure out what it was for and which side of control arm it went on. Maybe the Drake ones aren't welded in and you can just knock them out and put on correct side?

Here are picture of the Moog 8123 arms. As you can see there is no reinforcement on either side but they give you two washers. I think I ended up putting one washer on each side lol. 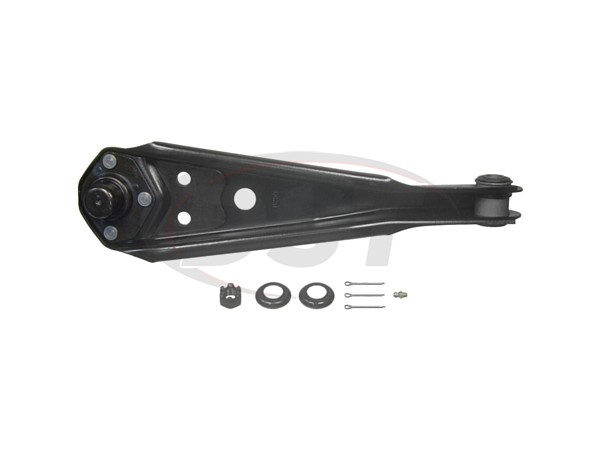 The aftermarket has been screwing this up since day one. I'd be more concerned about the Chinese ball joints on the Drake arms than where the cup washer was incorrectly installed.

The formed washer is crimped in the arm like an eyelet in your shoe so you cannot get it out without destroying it. That is the way the original was also just on the other side.

As usual have heard nothing back from anyone.

BTW this car had two sets of Ford ball joints in less than 5,000 miles so the Chinese might be better, lol.

I ran autocross and when I tried radial tires when the car broke loose it was gone instantly no time to recover and I hit curb very hard almost rolled the car couple times.

I went back to bias ply polyglas Goodyear and ran better times. The suspension was not built for radial tires at least not on autocross runs then.

That was then I am sure tires are different but radial tires roll over and when the traction is broken you usually spin out.

NASCAR drivers hated the radial when they went to them on track until they got the cars working better. They also had to start flooring the gas to stay out of the wall when they broke loose because there was no recovering a car with radials on it.

With the bias ply tires you could let off gas and steering into it and recover most of the time.

Also the upper ball joints are MOOG that come from NPD or the ones I ordered were. Will see them maybe today for sure tomorrow.

Ok guys just another one of those odd things from Ford.

I have been in contact with Richard Schmidt of NPD. He was very prompt in contacting me this morning that he had talked with MCA and the lower arm like I was sent was correct. He also got back to me this afternoon with a picture of their 1973 Cougar convertible with 475 miles on it and it is make the same way. BTW it was the last convertible made.

So how my car got a different set is just like my car got the wrong rear end also. Must have been a Monday car, lol.

So I have to retract what I have said about the arm being opposite. Always something new to be learned on these cars every day.

So the arm looks like it should now is it any good mechanically I do not know. This car will probably not be on road so will never know.

So for NPD not to just tell me to go leap is a pretty good suggestion that they do try.

Here is the picture of the Cougar lower arm with 475 miles on it. Still has the original tires.

It has a lot of rusty parts also. With no paint has to rust. 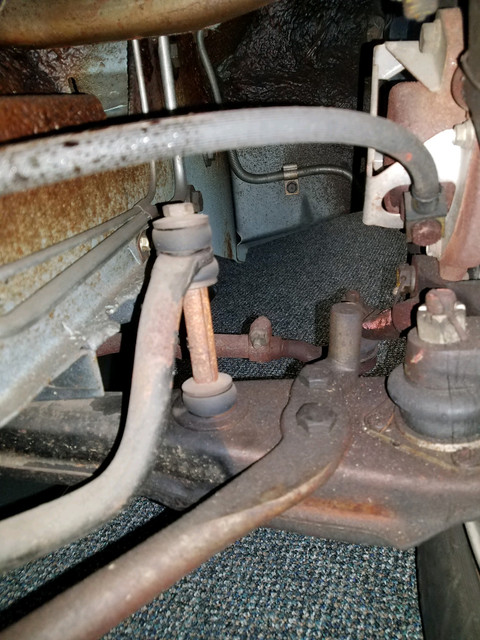