The fuel system vapor canister is an important part of the emission control system.  I had one that I had salvaged from the coupe that burned, and thought it was only the vent cap that was missing, but when I retrieved it from my parts bin to add it to the Mach 1 I am restoring, I found it needed more than just a cap and paint.  The center vent was completely missing and there was some melted plastic visible down  inside, so I decided to rebuild the canister. 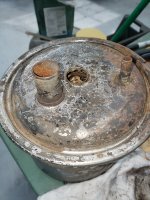 To get the can open, I had to pry open the small tab, and then start to slowly pry up the flange.  Tapping with a hammer, then twisting and prying up slowly got the flange opened all the way around. 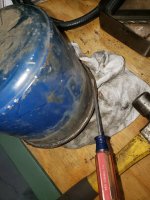 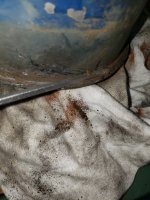 Once the canister is opened, it revealed a spring that holds down a perforated plate that keeps the activated charcoal contents in place. 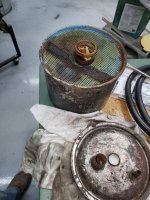 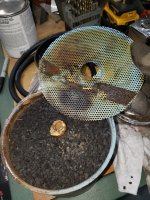 As you can see, the central vent was melted and had to be repaired.  At the bottom, was another perforated plate just like the one on top of the charcoal.  In my case, the lower plate had some areas with some significant rust, and needed some clean up and repair. 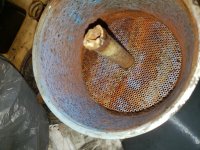 The center post has 4 small feet that keep the lower plate off the bottom of the can and allow air to enter and then be drawn through the charcoal.  Because the charcoal sits on the lower plate, and because both are identical, I swapped the upper plate to the bottom because it was in better condition. 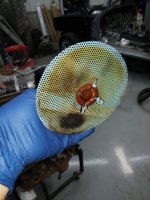 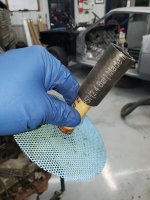 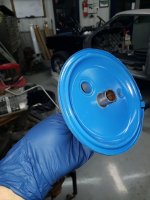 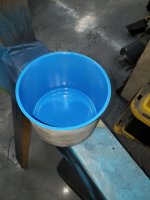 I put the perforated plate and center vent back into the can, added the top and steel tube, so I could measure it and cut it to the correct length. 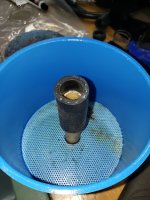 A little bit of JB Weld on the inside secured the steel tube, and another small bead on the outer edge was smoothed around the outside. 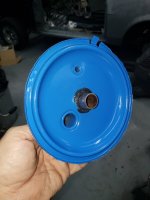 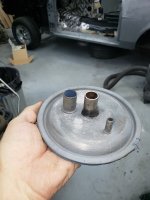 I had to repair the perforated plate that I was switching to the top, and a little bit of JB Weld held it together. 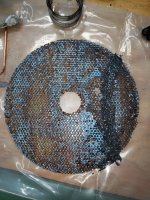 A little paint made it look more presentable.  I also had to enlarge the center hole enough to let it fit over the fuel hose. 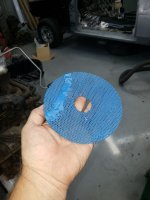 I weighed the charcoal I removed when I disassembled the can.  It was right at 2 lbs.  I made a run to the local pet store and picked up activated charcoal that one would use in an aquarium filtration system. 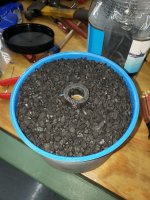 I put the top perforated plate back on, and used a small piece of TIG wire bent around the center to help reinforce the top plate, and added the spring. 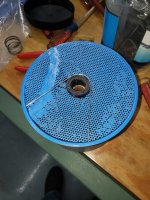 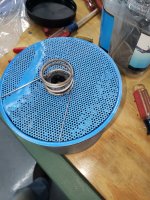 At that point, the top can go back on.  Because it's under pressure from the spring, it's a 3 hand job to secure it, so I don't have any pictures of that.

Pushing the top down, I used a couple large clamps to hold the top to the bottom.  I then inverted it and used a body hammer to knock down flange in several areas to secure the top to the bottom and keep them from separating.  I used a hammer and dolly to fold the flange down around the entire perimeter.  I'm sure there are other ways to get the flange folded back down, but that is how I did it.

A bit of Ford Dark Blue and it looks good as new. 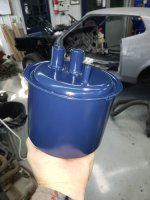 The vapor canister bracket has 2 pieces, plus the screw. 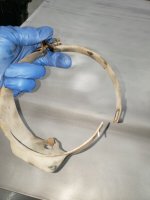 After media blasting, I painted it the same Ford Dark Blue as the vapor canister and secured it in the engine bay. 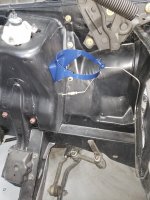 Putting the vapor canister in the bracket, and once the new vent cap and vent lines are installed, the job is done. 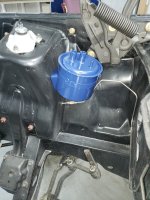 So now you know what is inside of the vapor canister, how to get it opened, and how I fixed the problems that I found inside there.

Excellent work, so say the very least! Very nicely done. Thank you for sharing the photos, and for your thinking behind your decisions. You are a credit to craftsmen/craftswomen who are willing to take the extra time do so a restoration as best is humanly possible. It gives others a new benchmark to work toward achieving, which will boost the entire car enthusiasts community.

I agree, well done. don't know how I missed this when it was first posted.

This is an excellent write up, thanks for your effort

Very cool! I'll be doing this to my canister soon. I wasn't sure how to deal with it, until seeing your write-up Well done and thank you for the detailed photos!

Thanks for the write up. This is next on my list once I get the fuel tank finished.