New the forum, not to Mustangs...

A big thanks to all the folks who make this site possible, and all teh members who take time to contribute.   Our cars are a unique subset of general Mustang-ness, this forum is a great source of specific info.  I'm happy to be all joined up now.

I was basically born in a '65 Mustang, or at least brought home in one.  My Mom's 65 coupe, 289 2V, 4 speed, with a bench seat (I've never seen another).  Wimbledon white with a black vinyl roof.  Currently Twilight Turquoise with the same black roof.

Anyhow, between a burnt transmission and college, I had to sell it in about 1998.  Regretted it big time.  Especially as I got older.

Bought a Ranger, but it felt wrong, and traded it for a 2002 GT, and traded that for a 2014 GT which is my current car.  All these were manuals.

To cut to the end here, a month or so ago I bought a '71 Mach to replace my old gal.  This car had been parked since 1983 in storage.  It's aaaaaaall there and nearly totally complete.

Car was ordered thru San Jose DSO - so it has the extra CA emissions stuff (DVCV with the switch, maybe some other stuff)

-Grabber Blue/Argent (is painted black, but the original paint is still there)

-console with clock delete (it has the clock in the dash, no tach

-map light in center console (it's a non A/C car)

Apart from what was gone when I bought it (fuel tank, exhaust back from the H pipe, original carb and Ram Air cleaner)  it's totally complete and unmolested.

It even has the right 14X7 wheels with matching production dates to the car.  Dec 1970.  Wheel trim is gone too.

Here's a photo, as she sat after being dragged out of storage.  Those are G60 polyglass BFGs.  Three of them.

I managed to get it started after a few weeks of owning it (had to put in a tank and some things), and even drove it around the block a few times, right on those old tires.  Everything worked. Even all the lights inside and out.

Thanks again, this forum has already been a great help.  We did this all on my first car before the internet...good times. 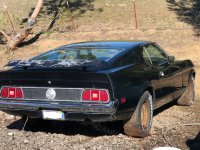 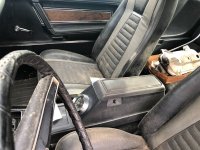 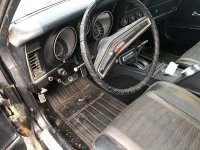 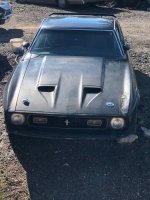 I took that sport wrap off the wheel, and it's not even cracked.  Thanks to the sport warp?

Here's a look in the power barn.  Ram Air equipment is present in the hood.  One of the flaps even worked when it started.

Check that headliner. The dome light worked too. 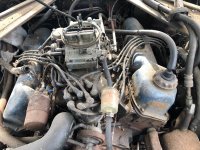 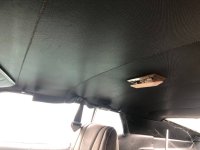 Looks like you have a nice car to start with to make it your own. Never saw a tach in the console like that, must be awkward trying to look at it, unless you tape a mirror to the dash.

To answer a couple questions. The only 71 - 73 that got front spoiler was the Boss and it was dealer installed so they could load and unload and not mess it up. Looks like someone changed your carb also should be the Ford spread bore I believe. I have 8 Cleveland cars. My 73 vert I bought out of California about 4 years ago has 48,000 on it and original paint and interior.
I know you should probably pull interior out and clean clean clean. I am sure mice have nests everywhere. Heater box probably needs a new core. Since no AC not as bad to do. If you want to eliminate any smells in the car get an ozone generator they remove all smells. Be sure an look for your build sheet under the carpet or stuffed into a seat.
My Mach 1 at home and also in the Mustang Owner's Museum in Concord, N.C.. The yellow vert was my driver while at the MOM. 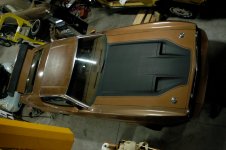 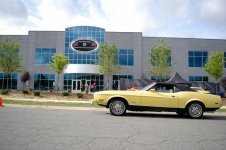 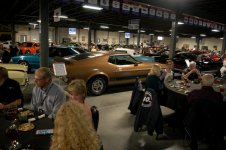 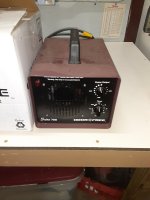 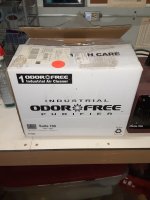 Don C said:
Looks like you have a nice car to start with to make it your own. Never saw a tach in the console like that, must be awkward trying to look at it, unless you tape a mirror to the dash.

Yeah, what a stupid place for it.  How can you even read it?  It's a shame they cut the console.  It was a bummer.

David! thanks for the welcome.  I love that copper color on that one of yours.

Yeah, that's a 600 Holley Vacuum.  The car has the square bore manifold on it.  It actually started and drove with that carb on it.  I didn't even clean it. lol.

You guessed it, the heater core is bad, bypassed it for now.  Got a new one on the shelf.

It's much cleaner than those pics now after a good wiping and vacuuming, and the smell is good, nice and vintage mustang-y.  It was a real odor flashback to highschool.  The car has THAT smell.

I have found no nests, and no chewed wires, but there definitely were some vermin in the engine bay.  There were nut shells sprinkled around here and there!  And a few weird pieces of garbage probably pulled up in there.  Wires all good thankfully.

Welcome from League City TX!  Make sure that your electrical devices work. My 72 Mach 1 almost burned down after I fixed the signal lights.  The wiring was a modified mess!  Smoke billowed from under the dash when I tried to back out of my garage.  Replaced the entire wiring harness.  All is good now!

Yeah, I have a fire extinguisher right there.  So far so good, but I do keep the battery out of it until I trust it more.

Welcome from Ohio.  Looks like it will be a good car to start over with.  Keep us posted as you get it cleaned up and redone.


Looking forward to seeing how it progresses.

Welcome from Oklahoma. You have a great starting point. Are you taking it back ti the blue and argent? Chuck

Hope your putting it back to original color.   Cool story.

MikeyV said:
Yeah, what a stupid place for it.  How can you even read it?  It's a shame they cut the console.  It was a bummer.
Click to expand...

Most of us have had to deal with previous owner shenanigans, saying numerous times "What the bleep were they thinking"?

Someone that's got the talent, like Luxstang or 1sostatic, should write a song called 'The PO Blues'.

Welcome from MO! What are your plans for the car? Repaint? Color?

Nice and loaded car you have to start with! Have a good time fixing it, we are glad to help  :thumb:

Welcome from west Michigan. Congrats on the new project. I saw the tach and WTH?? LOL, it is a nice flat surface though. I wish you were closer as I have a nice console I'm thinking of putting power window switches in at the same location as your tach.