This is after all the sheetmetal replacement had been completed, engine compartment detailed, etc. I had a running, driving chassis with 302, 4 speed and a 3.40 TracLoc 8" rear.

Interesting fact, 15 years ago today (4/11) I loaded it up and brought it to the body shop for final straightening and paint.

Traded a 70 Torino GT project to have the car painted, you can see that to the right in the pic. I miss that car and am on the hunt for another one.

In what could be considered a world's record, the car was finish blocked, assembled, painted and back home for final assembly in 45 days.

I completed the final assembly, did the interior, glass, trim work and everything else to get it ready for my wedding day two weeks from when it came back home. Total time was 66 days from the time it hit the body shop, to the morning of my wedding day when I bolted on the Kelsey Hayes wheels. Still had some detail items to complete, but it made it through the day without issue, logging over 100 miles and getting rained on.

Drove the car mostly untouched for years. Had a vibration vibration start one Saturday night coming back from a cruise in 2015, and determined that the 8" ate the pinion bearings, so I elected to swap it out for a 9" with 3.25 gears, along with new leafs to replace the now 45 year old originals.

That's pretty much how it's been for the last six years, other than a wheel and tire upgrade, and this is how it sits now.

Now it's time to turn the wick up and dump the ho-hum 302 for a proper 351C-4V engine and some other goodies along the way.

Nice looking car, well done. I like the color, my car originally came with the bright blue metallic, but the first owner decided it would be a better sleeper if it were white. At least he had it done right, everything in and out, very little of the original blue left. I would like it back to blue, just haven't convinced my self to do it, engine and interior are out, so now would be the time.

Thank you Hemikiller for that story behind... I ever wondered what's this Hemikiller about...  :thumb:

What are your plans for the 351C 4V - more original or souped up, already some details in mind?

Did you have a non-NACA-hood originally on the car as you get it?

Nice history on your car. I think the transformation to the new engine will be cool to watch.

Great story, thanks for sharing. I too like the 70-71 Torinos, a beautiful car. My oldest son and I restored a 71 GT in 2005. It was too nice for him to drive it as a daily driver so it got sold to a collector. I wish we could have kept it. Chuck 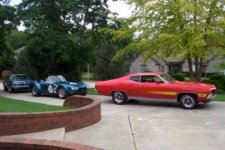 c9zx said:
Great story, thanks for sharing. I too like the 70-71 Torinos, a beautiful car. My oldest son and I restored a 71 GT in 2005. It was too nice for him to drive it as a daily driver so it got sold to a collector. I wish we could have kept it. Chuck

Wow... Too bad! I always had a soft spot onto these too. But that's life - sometimes you had to make your decisions when life and cars don't fit together at that time... Don't ask how I know!

Fortunately you kept the two cars in the back  :thumb:

Last weekend I pulled the exhaust off. I had "borrowed" this exhaust from a friend in 2003 when I first got it running. Was supposed to be temporary, but life intervened. He had originally installed it on his 67 coupe in high school - back in 1985! Have a pair of the height of early 80's exhaust tech -  Sonic Turbos ....

I had the guys in the shop make the sheetmetal parts for me. I designed them in 3/16 steel - it might be a bit overkill. Bent up a set of tubes to test fit. Passenger side fit nice, driver's side not so much. I formed a new driver's side Friday after I adjusted the path.  I have got to clean the underside of this car.....

Driver's side fits much better now. 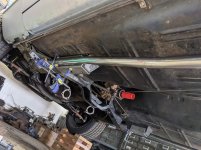 ... and the completed set 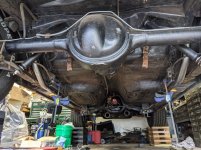 That should tie her together!!  Looks good.

Nice work on the connectors!

Dennis that looks awesome dude!! It looks very clean and tight! Any pics of how the ends finish over the axle?

rio1856 said:
Dennis that looks awesome dude!! It looks very clean and tight! Any pics of how the ends finish over the axle?
Click to expand...

Right now it's just a blunt end cut and "C" brackets that wrap around the rail just below the shock crossmember. I'll probably just do an angle cut at whatever makes sense and cap it with .125" steel.

I have a couple other tweaks that I need to make before I'm ready to weld.

Had a nice FB Marketplace buy this weekend, responded to an ad for a pair of toploaders and while I was there, also picked up a nice Weiand 351C tunnel ran for dual 4500 Dominators. I'll never use it, but it looks awesome on the shelf.... 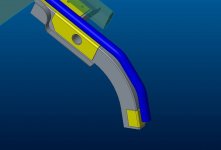 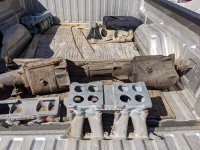 Nice!!! Blue is my favorite color.

The tunnel ram will look great cleaned up and sitting on a shelf! Or you could buy another hood and......

On the rear of the connectors that's kind of what I did but I didn't go around the spring eye. I just capped the end with some metal I had in the garage. I think you'll be very happy with those.

Wow, been a while since I updated this...

Let's see - after screwing around with the welder to get it working right, the subframe connectors are in and welded. Pulled the trans, clutch and flywheel a couple weeks ago. Cleaned up the underside of the car and acid etched it for another coat of paint. Spent a bunch of time getting parts in line for the engine swap and had a free weekend to get the engine out, so I got to it yesterday.

I do have to give a shoutout to Uncle Tony's Garage on Youtube, he saved me a ton of time and effort when pulling this engine - by leaving the hood on. I don't know why it never occurred to me at any time in the last 30 years, maybe because every aftermarket repair manual or "How to Rebuild X engine" book I've read says to remove the hood. However, while watching THIS VIDEO he mentions that every car is designed to have it's engine removed with the hood in place. I initially was like "WTH did he just say?" and after rewinding a couple times, I hit my manuals. Looked through at least six factory Ford shop manuals of various years and not in any of them did it say "remove hood" in the engine removal procedures. After pondering for a minute, it occurred to me this was the smartest thing the engineers could have done, since hood removal always involved a bunch of gymnastics to get it realigned and had a huge potential for paint damage. So, I decided that I was going give it a shot. I had about two inches to spare, but it came out with the hood in place. Obviously, this isn't going to work in some situations, but I'm pretty confident the 351C will go in the same way. 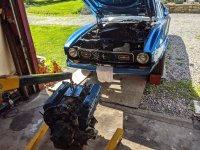 Pulling the engine without removing the hood I would not think that was even possible.

Awesome... It ever was some kind of automatism: engine out meant hood off... Live could be so easy. At least pulling the engine alone without the trans...

mach71351c said:
Pulling the engine without removing the hood I would not think that was even possible.
Click to expand...

Yes, same here. I'd done it on cars that had prop rods, so you could rock the hood back vertically. I was so conditioned to remove the hood as Step #1 on anything with conventional sprung hinges that it never even occurred to me to try.

I followed the procedure in the 71 shop manual as an exercise, and it worked perfectly.  I had removed the bellhousing, flywheel, clutch and all that as a precaution, but it's not really necessary.

Anyway, proof is in the pudding, I shot a timelapse video just for those that tried to call BS on me.

Yesterday was transmission reassembly day. I had previously cleaned, degreased and de-rusted all of the components and they were waiting for me to get to work. This toploader came out of my belated 71 M-code XR-7 and apparently, it had a very hard life. The synchro hubs were completely shot, the splines were terribly worn, and fit loose on the mainshaft. All the gears were it top shape and the only other damage was some minor burring on the dog teeth, which I cleaned up. Ordered new hubs from Allstate Gear, rebuild kit is the high load road race bearing version from Dan Williams. Trans itself is complete, just need to reassemble and install the shifter, and button up the top cover. Oh, also need to find the bolt for the detent on the side of the case.   :classic_unsure:

Just a note for anyone doing this job, the outside snap ring that comes on the input shaft bearing does not allow the retainer to sit flush against the case, DW supplies the correct one separate in his kit. 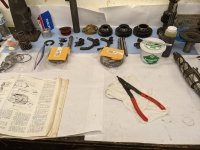 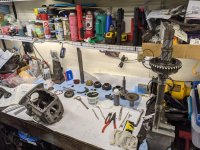 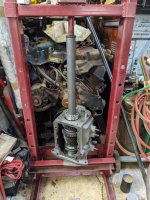 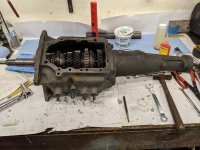