Hello new guy here. I recently reaquired a B1 and looking forward to restoring and driving it…… AS SOON AS THE SNOWS GONE!!

How about posting a pic or two of your car?

Welcome from Central New York.
We do like pics.
Mike

Howdy and welcome from Texas! Congratulations on your Boss acquisition. You'll find plenty of advice, support, and camaraderie here. 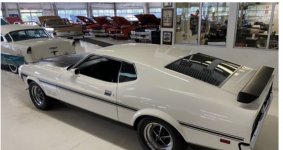 Another welcome from N. Idaho, and I wish my B1 looked that good!

Welcome from Ohio. Very nice looking from the picture. What restorations do you have to do?

Hello and Welcome from Michigan! Looks like a great car.

Nice car - but it does not look like it needs a restoration. What are your plans on it?

Hello and welcome from SW Ontario, Canada.
Nice car you have there.
7

Thanks for all the notes guys! For some general info….. I previously owned this car in the late ‘70s. I used for good weather transportation, drove it to college, autocrossed it on the weekends and street raced it in Minnesota and Michigan, where I’m from. Ended up selling in ‘86 to payoff my student loan debt…… a decision I regretted hundreds of times…..

Fast fwd 36 yrs, and while sniffing around on the internet with my son, I searched Boss 351, and low and behold up pops a picture of this car….?! After describing to my son how much this car looked like my old car…. And casually looking at some pics in the gallery, I started seeing small but unique changes to this car that I’d done to my own. Curiosity got the best of me, and referencing a copy of my old cars VIN….. it confirmed my suspicion, this was in fact my old car!!
A month or so later it’s now back in my garage! Surprisingly, largely unaltered and remarkably with only an additional 4k miles from when I sold it. Admittedly I was skeptical of the odometer, but after inspecting the car in detail it does appear to be accurate. This inspection plus the fact that I bought the car from a gentleman that owned for the last 20 years, and while being a car enthusiast, he didn’t drive the cars in his collection, hence the low miles.
I can’t account for a 6 year period of ownership of the car…. 1996-2002, during which some body work and a paint job, along with an engine rebuild was accomplished. Finding the owner at that time would answer a bunch of questions regarding the motor and other components. I think the car was in southern Wisconsin at a restoration shop during this time, but that’s all I really know at this time.

If anyone has any ideas of who or where this work may have been done…… I’M ALL EARS!!

One last detail…… in the trunk I found this plate that I assume was on the car during this period. 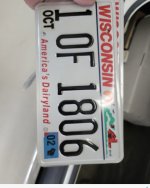 A cars history is what gives them a personality!! Welcome, from Missouri! Great looking ride!

Thanx!! Still almost in disbelief it even occurred!

Welcome! That plate is so pristine it doesn't look like it even got bolted on the car.
G