72 Mach 1 - Paint chrome moulds above and below rear honeycomb

Hey guys,
I have a 72 Mach 1.
Per the picture (gold glow Mach 1) the black paint has rubbed off on some parts of the chrome mould that is at the top and bottom of the rear honeycomb that is between the tail lights.
See the marked section. 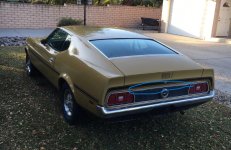 Is there a right way or a wrong way to strip and repaint the chrome mould?
I picked up a new set from Scott Drake but they are all chrome and don't have the black out on them.

This is what I'm aiming for... 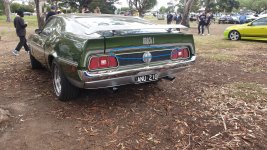 I did a bit of research on YouTube looking at other 71-73 Mustangs and it looks like most people, when they restore a car or replace the tail lights and or chrome part don't bother to paint the trim and or don't paint the black outs in the tail light bezels either. Most are chrome all over.

I assume the black outs on the chrome and the tail lights are specific to Mach1?

Any suggestions as to painting the chrome would be appreciated.

It's not that hard to do. The top and bottom strips are separate from the insert, so you need to remove that first. When I redid mine (originals) all I did was to mask off the "chrome", use a Scotch Brite pad on the painted area, then I always choose SEM Trim Black as my go-to trim paint, paint in thin layers 2-3 coats. Let then sit for 48hrs and refit them.

Like Stanglover, I painted mine with SEM Trim Black. 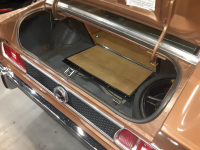 The 72s had the black out. Chuck

Thanks for the tips Gents.
I have removed the trims and will mask up and paint..

Peel tape off while it’s still wet. I waited till mine was dry and it took little pieces of paint with it and I had to redo the whole job.

As Hemikiller posted, the black trim on the tail light panel moldings and tail light bezels was exclusive to the '71-2 Mustang. Two different moldings were used depending on whether you have the thin metal camera case finish or the plastic honeycomb panel. The moldings for the metal panel were straight, and the molding for the honeycomb panel had a center concave section to allow for the larger size of the flip-down fuel cap as used on Mach 1s. All '73 Mustangs had bright, no black paint, tail light bezels, and tail light panel moldings, regardless of model. All the repo moldings are Mach 1 style moldings, pretty much the one-size-fits-all mindset the repo industry uses. You wouldn't want to see the selling price of a set of NOS moldings now anyway. Unless you plan on returning the Scott Drake moldings, I would do as suggested, prep them and paint with the SEM trim black paint. The finish on these moldings is anodized aluminum and could be polished but will tarnish and dull with time. With the new molding and fresh black paint, you'll find that it will really brighten the appearance of things "Back There"! Just be careful, and don't get caught up in the "While I'm There, I Might As Well"! You'll be ordering some new taillights next!
You'll also need to check the condition of the seals on the molding retainers. Some vendors include the mounting hardware with the moldings, and others don't. The Ford acorn nuts had a sealant on them, and the metal molding retainers had a sealant-type o ring on the threaded stud.

While not the best image using a camera phone, the picture below of a NOS molding indicates the look I hope you get with yours. The second is the OEM hardware, also included with the Ford moldings.

Steve,
Thanks for the info.. Yep all is understood. I will use the repro Scott Drake ones and paint them. First 2 coats done. Now waiting to dry.
I know what you mean about the tail lights. I have already cleaned up the original honeycomb plastic and painted that. I may now pull the tail lights out and mask them and repaint the black... Then the back section will look so much better. Am using a saturn paint..
Re the retainers, yes the seals were all bad. I removed them and used some rubber seals from some self tapping Tek screws that have seals on them. I removed the seal from the Tek screw and placed them on the stud before adding the Ford acorn nuts. My car is fairly original so has all but 2 of the acorn nuts.

Looking at your pictures are there rubber washers on both sides?

I was looking at buying a set of retainers and nuts but they did not come with the acorn nuts so did not bother and all mine are ok..

Thanks for everyone's help / info. Most appreciated.
Last edited: Oct 5, 2022

Hey Brendan,
You'll like the look of that new molding and paint. You will be okay as long as you don't compare your taillight lens to new ones. The red plastic darkens a little from age and 50 years of dirt and grime. I noticed when checking that no two vendors seem to offer the same hardware with the moldings, while some even make it an extra cost item. Unfortunately, the OE acorn nuts with the sealant are no longer available from Ford.
There was only one seal on the molding retainer (which was part of the molding retainer and not available separately), and sealed the hole on the taillight panel from the outside. The soft seal on the acorn nut sealed the panel from the inside. I have used a 3M soft rope type seal (3M-8578) to seal small items, such as the acorn nut. We used a lot of this product both in the main and body shop. It stays pliable and doesn't dry out or crumble over time like some of the other similar sealants I've used. Just make sure they are sealed. Water seems to be able to find the slightest of holes in these vehicles. I fought water leaks on Money Pit # 1 for a year. It had the typical tail light leaks, and I found several leaks from missing seals from when the tail light panel was replaced before I owned her. You can probably find the 3M or similar type product in a smaller size at auto parts, paint supply, or a hardware store.
Good luck with your project, and please show us some "After" pictures.

Steve, thanks for the info..
I had only added a seal on 1 side.. I will go to the local hardware store and see what I can find.

Glad it's coming together for you.
When mine were done, I used 3M sealing strip for the attachments. Actually, I used it on all bolt attachments, bumper etc.
Moving on to the taillights. Theses have always been a source of problems. My car is all original steel except the taillight panel that had to be replaced due to pin holes around the lights from the taillights leaking. What I did was to strip them completely, very carefully I might add. That way I was able to use clear RTV on the back side of the bright parts because I suspected water can seep through and into the trunk. I used a product we have here called Automotive GOOP to reassemble the lights rather than the glue like "stuff" the factory used. I love that stuff! For the lenses, believe it or not, BRAKE FLUID works wonderfully to remove overspray and gunk from the acrylic. Just don't get it on any paint work. Make sure to wash with hot water and dish soap.
I also went one step further and yes, it will make light removal a core, but I used black seam sealer around the assemblies. Water ain't getting in now!
M

I used fine line tape and SEM trim black. Very happy how it turned out.

Mike and Kevin could give master classes on how to restore these cars. Fine work, Gentlemen!

Nice work Mike. I will give that a go..
M

Mister 4x4 said:
Mike and Kevin could give master classes on how to restore these cars. Fine work, Gentlemen!
Click to expand...

bdennis said:
Nice work Mike. I will give that a go..
Click to expand...

Body shop supplies have a self etching primer black for a good base, too.