Hello all. I just picked up a 1973 Mustang Grande and am going to try to restore it. My father bought this car about 20 years ago hoping to restore it and it ended up sitting in the garage untouched ever since. It's taken me three years, but I finally convinced him to let me scrap it. In reality, I took it to a friend's house to restore it for his birthday this November. First thing I've done is put in new points and see if it'll try to fire. It did, but not on all cylinders. He bought this car knowing absolutely nothing about it. I took the carburetor off of my truck and I had the thing running for a few minutes. The engine is quiet, but doesn't run on all cylinders. It has a bent pushrod from a stuck valve, blown head gasket, rusted out freeze plugs, and I don't know what else yet because I found it to be running on only four holes. Compression checked out on all but the stuck valve cylinder (that's how I found it) but seem low to me, but not enough to not run. The floor is rusted out as is the roof because of the vinyl top it used to have. This is going to be an adventure for me and I know it'll be the best surprise I could give him. Unfortunately, with a recent job loss, it's going to be hard. I'm looking for a new job daily, and have a couple that seem promising, but I don't know. Although I doubt that anything will come of it, but I have opened up a "go fund me" account in hopes to get some money to help me out with the old girl. I always wanted it to be a father/son project, but because he never has the time for the car, or the money for the car, I've taken it upon myself to get it going for him to say thank you for all that he's done for me over the years. If anyone would like to help the account is at gofundme.com/yhsre4v She's not much yet, but I want to make this a really nice car and make it so it can be a reliable daily driver since this is my father's dream car. Most of the pictures are on my phone, but I'll get uploaded what I can as soon as I can find the cord for it. 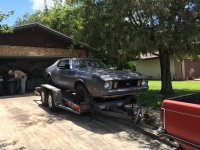 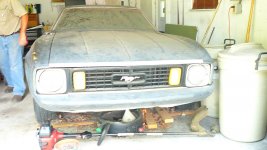 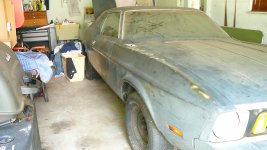 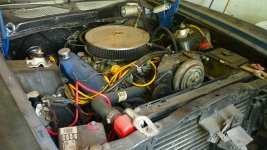 Welcome from TriCities WA. Looks like the car is in pretty good shape. Keep us updated with the progress.

Good Luck with your build

Right now, I want to get it running how it should. The rust is bad, but nothing that can't be fixed. I can do all the mechanical myself, but I don't know body work and I'd prefer to leave it to someone that does. There something that has me a little concerned/confused though. There is no kickdown from the carb to the trans. Do I need it or is the FMX one of those transmissions that it doesn't really matter on? Whoever had this car before had put an Edelbrock manifold and four barrel carb in place of the original two barrel. The carburetor is pretty bad, I can't get it to idle, but then again, it's not hitting on all eight. I'm going to go to a machine shop come Monday to talk about some new valve guides and getting the valves re-lapped. The bottom end has everything marked for what cylinder it goes in, so it's been apart before. There's a decent amount of carbon build up on the pistons, but not enough to make me think this engine has had a lot of run time, so I think the bottom end is in good shape and it's just some valve issues.

As for your fundme account - usually only friends and family who are closer to your cause are your primary sources for financial help. They are emotionally vested - they can see and feel your passion for your father's car.

Watch for similar parts cars. One could save you a lot on pieces you need.

As for your fundme account - usually only friends and family who are closer to your cause are your primary sources for financial help. They are emotionally vested - they can see and feel your passion for your father's car.

Watch for similar parts cars. One could save you a lot on pieces you need.

I see. I do intend to keep the watch for part cars, but my thought it couldn't hurt to try. The website really didn't say much of anything about that, just to share the link. The account is free, so why not? Anything will be helpful in getting this back on the road.

:welcome2: Welcome and good luck to you.

The FMX needs a kickdown rod.

You will also need a kickdown adapter for the carb side to connect it.

Or you can switch to a locar cable kickdown setup.

You can search this site for those topics.

The FMX needs a kickdown rod.

You will also need a kickdown adapter for the carb side to connect it.

Or you can switch to a locar cable kickdown setup.

You can search this site for those topics.

Good to know, thank you. Will I harm it if I try to drive without like I would a GM 700R4?

Welcome to the group. You said something about the inside of the engine had been marked. As far as I know Ford has always numbered the rods and caps. Even back in the flathead days.

Welcome to the group. You said something about the inside of the engine had been marked. As far as I know Ford has always numbered the rods and caps. Even back in the flathead days.

Really? Then again, the only engines I've ever had apart were Chevy which I've never seen one numbered. I didn't know that Ford had done such a thing. This is actually the first Ford I've worked on. I was brought up around Ford, bought a GMC S15 as my first vehicle, then ended up buying a '76 Plymouth Scamp as a small project. This car is not mine, would love it if it were, but I have yet to own something made by what I was raised on.

What a gift for your father, would like to see his face the day you give him the "scrapped car" lollerz

Welcome from Pinellas County, just above Bradenton. Sounds like a monumental but worthy challenge for anyone. Hope your father can see the end result.

Glad you joined us. Keep us posted on your progress.

Welcome from the opposite corner of the US.

When you take your heads in, have the machinist check to make sure you have hardened valve seats. Also, if it has original (two-piece) valves you may want to replace them with one-piece valves.

I'm like you, body work is not my forte. But, I am still willing to do it. Explore some of the other threads on here and you'll be amazed at some of the cars the members have resurrected. You'll also find a lot of pointers on how to weld in new panels and other rust repair tips. Use the "Search" box in the upper right corner.

howdy from Phoenix! That's cool that you are restoring it for your dad.

B
Popped back in after a looonnnggg absence