My 72 convertible has an "X" paint code. I know that this indicates a "special" color ordered, but as far as I know there is no way to know exactly what color was actually ordered. Not even Kevin Marti has this information. I had the car repainted several years ago and the 1970 code 6 Bright Blue Metallic ( Acapulco Blue) was the best match. All that said, does anyone know what colors/codes and or years would have been available as a special order for 1972? I realize this is a shot in the dark! Thanks everyone

Special order paint colors were typically any color that was available for that model year on any Ford, Lincoln or Mercury. Many colors were carry-overs from year to year, with only the paint code or name changing. The code 6 Bright Blue Metallic is an excellent example, as it was code D in '68 & 69, called Acapulco Blue, then it changed to code 6 in '70 & '71 as Bright Blue metallic. For '72 it was code 3J with the same name. If your car had been painted Bright Blue Metallic, it wouldn't have been a special order.

The door data tag paint section on a special order paint car is usually blank, and you'll have a six digit DSO. First two digits are the DSO it was ordered from, last four are the special order number. IIRC, sometimes the color may appear on the invoice, which Marti "should" have available. All 72 passenger car paint codes were two digit. There was a Ford Truck "X" paint code, but that's Light Ginger Metallic - pretty hard to mistake for blue.

As I am progressing with my restoration of my 71 Mustang I am starting to second guess my color choice. When I bought the car I was looking for a 73 to replace my car from my high school/college years. I found a really solid 71 with the options that I wanted (fold down seat being the deal...

Great information guys! You are right Hemikiller, my door data tag is blank with a DSO of 560139. I also have both the original invoice and window sticker that reference that number as well but no reference to the actual paint color....just "special paint" noted on both. Stupid question, is there a way to "decode" those last four digits? Based on the phots provided by Don C, my choice of color of "Bright Blue Metalic" was correct but leaves me confused as to what was special? Could it be the black rocker panel paint? Was that an option from the factory?
R

I went through this with a 1969 XL Convertible I had. As far as I know, the only way to figure out what the original paint color was is to have a paint shop scan the paint in a protected area. My car was painted in what appeared to be a 1966 Lincoln color.

The lower body black or argent paint and bright trim would be part of the new-for-72 Decor Group, which gave a base convertible or coupe a "Mach 1 style" appearance package. It wouldn't trigger a DSO Special Order, as it was an RPO - regular production option.

AFAIK, there is no way to decode the special order number. You'd have to have the original order sheet.

Whoever ordered the car may have chosen a similar, but different metallic blue. The closest '72 color would be Blue Fire on the T-bird. It was very similar to Bright Blue Metallic, but had more metal flake in it. It was one of Ford's "Glamour" paints for the year. 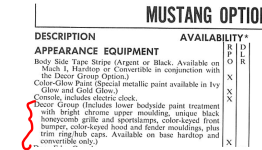 Again, great information! Mine has everything in the appearance equipment package except for the color keyed bumpers and hood/fender moldings....they are chrome. Maybe they weren't available at the time it was ordered, who knows. Thanks for the feedback guys....very informative.

To further your comments on the special paint and your bumpers being chromed: I have heard anecdotally that special paint cars that would otherwise have had the body color front bumper got a chrome one. The reason being that assembly plant body shop would not have been able to handle the special paint needed for the color-keyed front spoiler bumper. I am assuming that these endura bumpers would come into the plant already painted.

Again, I am not sure on the special paint trumping body color front bumper but it has been thrown around before.

Does your car have a buck tag on the core support? The tag may have the paint code on it.

The tag would be on the passenger side, on the outside between the rad opening and the pass headlight bucket. 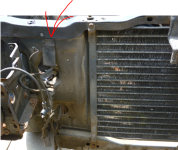 That is an intriguing point, makes sense though. Unfortunately I have never been able to locate a buck tag. Thanks for the info and the photo. It's always fun to find out about all the oddities that transpired during assembly back then.

Check out how much this car sold for at Mecum Kissimmee!
2